Just resuming my Mapbox on Steroids HDA to capture some data.

- if I try to flag the use cache option seems to cook something but nothing is displayed. Using as a test Mask by Feature to calc the min and max height, retuned totally wrong 1.79e+308 and -1.79e-308 so I suppose nothing is loaded

- the data are not smooth, I need to improve the resolution to be used on a realtime system otherwise will be terrased in this way 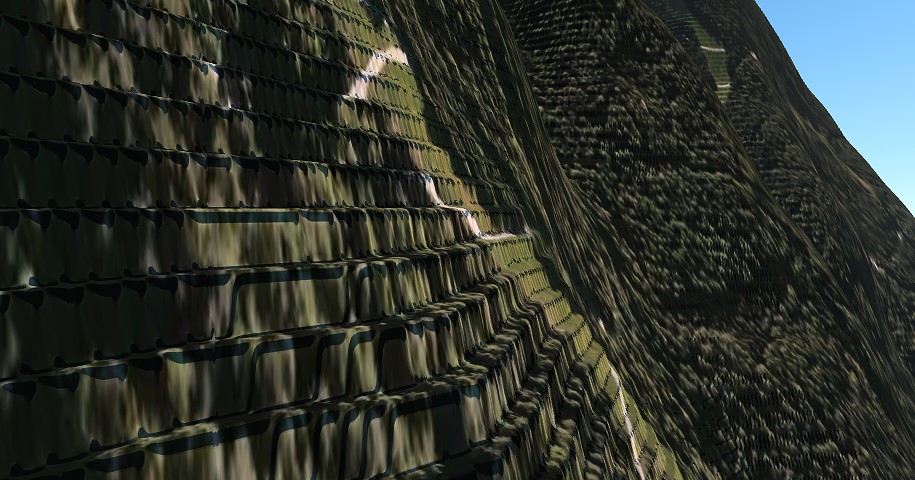 goat
In all seriousness, Linux has great capabilities when dealing with memory issues -from ssh-ing in to kill processes, to launching tty terminals when the gui stops. It also uses jemalloc for memory management, which is best in class, even if it allows facebook to run

Using Houdini with the final goal to replace 3dsmax (Windows only), I was testing it also on my KDE Neon secondary boot.
Unfortunately I'm needing to use Mapbox on steroids node (https://gumroad.com/l/IMnXK)
to gather high res terrain data, and is not working correctly on Linux (at least not for me).
So I'm stuck on Windows and didn't know if Linux might be working in this workflow.
Btw I find Houdini great for terrains, but really cumbersome to work with CAD files, so I doubt will be able to replace 3dsmax soon.
Edited by davide445 - Nov. 10, 2019 13:18:02
See full post

Maybe I needed to specify I'm working on Windows. I didn't find an option to allocate a specific number of thread/cores, or there is one.
See full post

Was asking if the PC was freezing, as in my case.
In my case the cpu became stuck at 100%,ram at 100% and next the system freeze attempting to work on VM.
See full post

That's REALLY interesting, really thanks for testing.
Didn't know about your CPU, but your PC freezes both swapping on SATA and NVMe?
Btw I was looking to purchase exactly the 970 Evo Plus NVMe drive.
See full post

Thanks for this answer.
If 64GB will be not enough will anyway use VM, using a NVMe drive will make any difference vs a SATA one for paging file?
I can also upgrade to 64GB RAM and purchase a 1TB SATA SSD so to switch there also Houdini (currently installed on the HDD due to lack of space on the OS SSD).
Edited by davide445 - Nov. 6, 2019 03:41:13
See full post

Yesterday after downloading 16k terrain data from Mapbox I discovered I'm unable to work on them since the node filled my 32GB Ram and started swapping in the virtual memory, blocking the system till I need to reboot it.

Currently using an HDD as virtual memory target due to the other SSD being too full, I was thinking what can be the most effective way to proceed so to being able to work

- upgrade to 64GB Ram, max allowed from my system. Still im not sure will be enough (in another freeze I was looking at 110GB VM allocated) so using again slow VM drive probably will reach the same blocking situation
- without RAM upgrade, upgrade to a 1TB NVMe drive, shared for OS and programs, using it also for VM
- also no more RAM but to 1TB SATA SSD + 256GB NVMe, using the bigger for OS and programs and the smaller for swap, cache and VM.I was reading this article where seems NVMe vs Sata didn't change much, but being my case not simulation with caching not sure is appicable.
https://www.mediaworkstations.net/2019/08/30/houdini-software-system-requirements-and-benchmarks-cache-disk-and-ram-part-ii-of-iii/ [www.mediaworkstations.net]
- upgrade to 64GB Ram and a new 256GB NVMe drive for VM and cache.
- was reading also the possibility to use some PDG node to optimize memory usage, but being I already stuck on the Mapbox node I think this will be only a later stage solution

Having this steps made as self sustaining gratings.

Imported an architectural model with 4500 nodes grouped in different groups 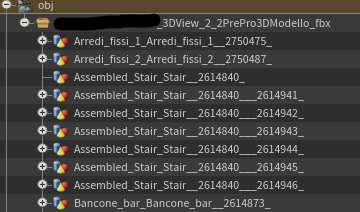 didn't make so sense to show them in node view.

I supposed selecting a node in the viewport will highlight it in tree view, but this didn't happen. 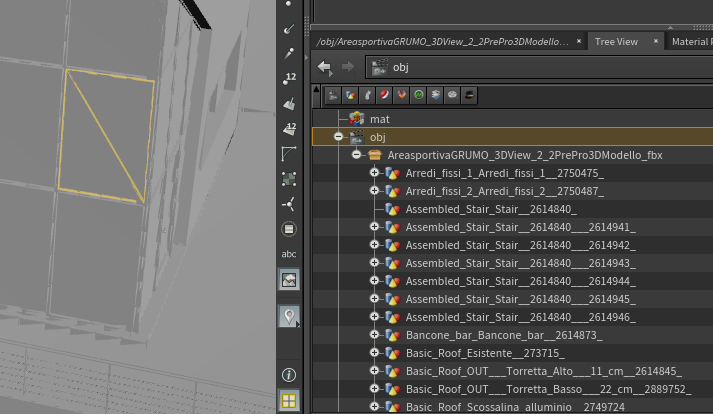 Also I suppose there is a way to select multiple nodes in tree view and next group them, also seems not possible.
I know there is a subnet option, but without being able to multiple select it's not useful. And I can't find what selecting without a feedback in the tree view when I select an object in the viewport.

Houdini Lounge » Will Polyexpand2d and some NURBS SOP be compilable in Houdini 18?

zengchen01
The road I generate by Polyexpand2d SOP is quite simple.
I think this road tutorial is more useful.Dokai Tutorial [vimeo.com]

Houdini Lounge » Will Polyexpand2d and some NURBS SOP be compilable in Houdini 18?

@zengchen01 can you explain how do you use it to generate simple roads, or suggest any specific tutorial you follow.
Trying to do this using OSM data, but with no luck (a beginner anyway).
See full post

Thanks, this is interesting for the houses part.
Main problem right now is about roads, didn't find anything like that for roads.
See full post

Trying various approaches to generate roads starting from OSM data.
Tested with PolyExpand2D, Straight_Skeleton, PolyExtrude, sop_sweep_geometry but the best I can achieve is with polyextrude these odd twisted geometry, all the others give error (I suppose for intersecating curves) or didn't result in anything. The .osm data file can be downloaded at this [drive.google.com] link. 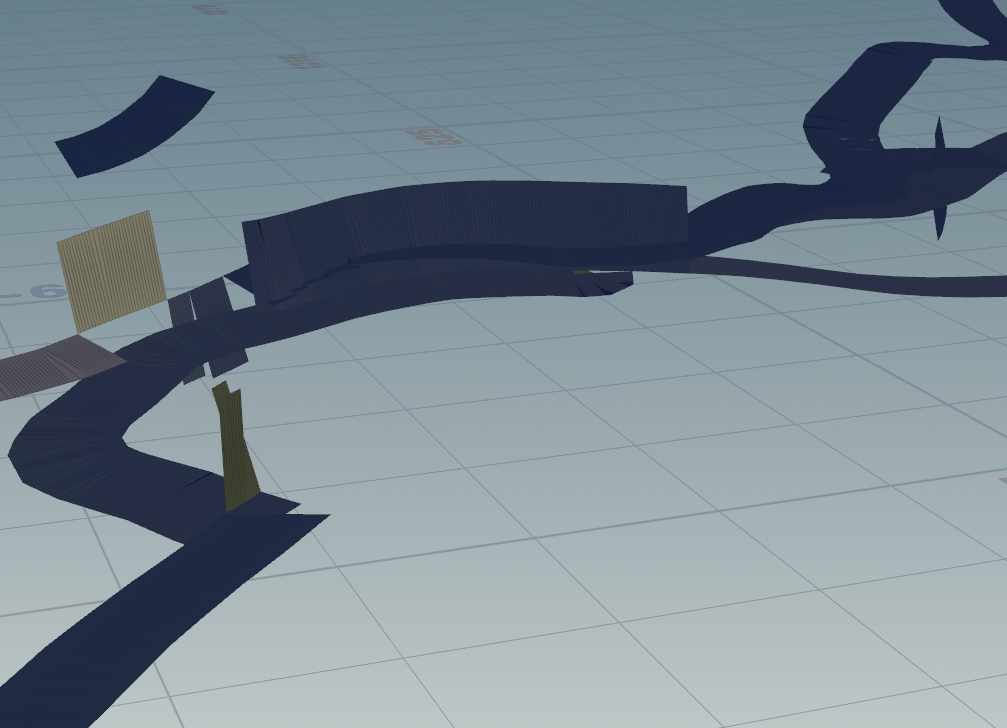 Solved: using QGIS I'm able to read osm file and export in shp format.
A pity can't be done in Houdini (at least I didn't find a node able to).
See full post

Using OSM Import SOP I was able to import the OSM vector data.
For reuse on realtime engine I need them to be exported in ESRI Shapefiles .shp format.
I didn't find any tool useful for this work, does anyone have experience on this.
Edited by davide445 - Oct. 8, 2019 08:57:35
See full post

Ok I can confirm definitely was a license problem.
Upgraded from Apprentice to Indie and after converting my Apprentice project using Orbolt [www.orbolt.com] into an Indie (ask to upload the .hipnc and then you can download the .hiplc) I was able to complete both the ROP nodes generating mesh and textures.

Just a problem, Houdini crashed after executing the Terrain Mesh ROP with this message

Is driving me mad.
Setting the Homing auto, or Neither and setting the near clipping plane to 0 didn't change anything.
The alert tell me the changes are used only in a new viewport, but reopening Houdini didn't change nothing either, nor I find a damn way to create a new viewport.
Viewport management is the single thing I like less - to be mild - in an outstanding software such as Houdini.

This one?
https://www.sidefx.com/docs/houdini/nodes/sop/material.html [www.sidefx.com]
Any tutorial how to use it?
See full post

Testing a workflow switch between 3ds Max and Houdini, another step is discover how is possible in Houdini to assign multiple materials on the same object, the same way in max is obtained using multi sub object material.
I didn't find a specific solution, any hint in the right direction is welcomed.
The goal is later to export in fbx and import in a realtime engine.
https://knowledge.autodesk.com/support/3ds-max/learn-explore/caas/CloudHelp/cloudhelp/2019/ENU/3DSMax-Lighting-Shading/files/GUID-D968CDD9-4C5D-489D-A311-ED7486FCD4AA-htm.html [knowledge.autodesk.com]
Edited by davide445 - Sept. 14, 2019 15:48:51
See full post