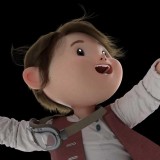 Would not work anyways cause I have like 10 baked hair simulations in the scene and when you change the first frame of the scene to be frame XX instead of frame 0, the outdated hair module from C4D does not understand that and thinks frame XX is now frame 0, resulting in hair floating around but not on characters heads …

I set my C4D project to begin on frame 64 and I rendered a frame in 4mn. But the second frame took 25 more seconds and so on …

I made a houdini simulation of a whale jumping out of the ocean, then imported it to C4D to integrate it in my shot and render with Arnold.

I launched the render yesterday evening, the first frame took around 3mn30 to render, with approx 2mn30 of exporting the sim into Arnold and 1mn of rendering.
I come back this morning and I see that with each frame the render time increases with up to 25mn exporting time !

Would you know what is causing that and how to avoid it ?