Digital Domain | Fate of the Furious

The Fate of the Furious

An Effects-Laden Solution to an Icy Problem

There’s no shortage of enormous stunts and effects action in The Fate of the Furious, directed by F. Gary Gray, just like the previous seven films in the high-adrenaline franchise. But, also just like the Fast and Furious films that have come before, these practical stunts are often mixed with an array of digital visual effects.

Nowhere is that more apparent than in the film’s third act when the action moves to a separatist base in a frozen area of Russia. Here, Digital Domain’s Vancouver and Los Angeles teams contributed visual effects to several key scenes, including a daring and explosive chase, and an even bigger submarine breach and destruction section.

The production filmed as much of the sequence as possible - in Iceland and on bluescreen stages. However, it was always planned that Digital Domain would match the action with VFX, and the creation of ice-filled explosions and debris and huge fiery bursts was something the studio handled with the help of Houdini. 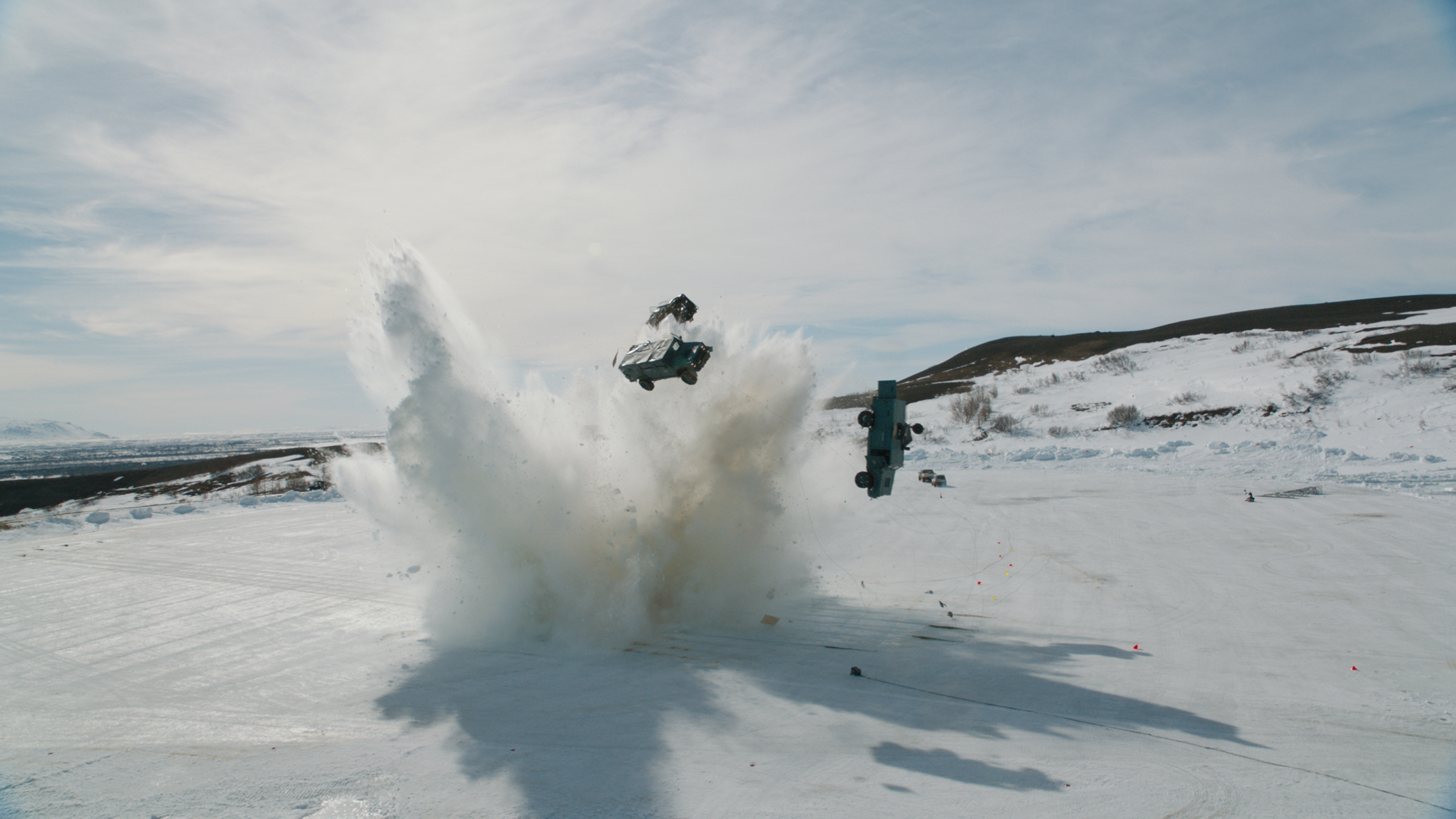 Original plate for the submarine breach. 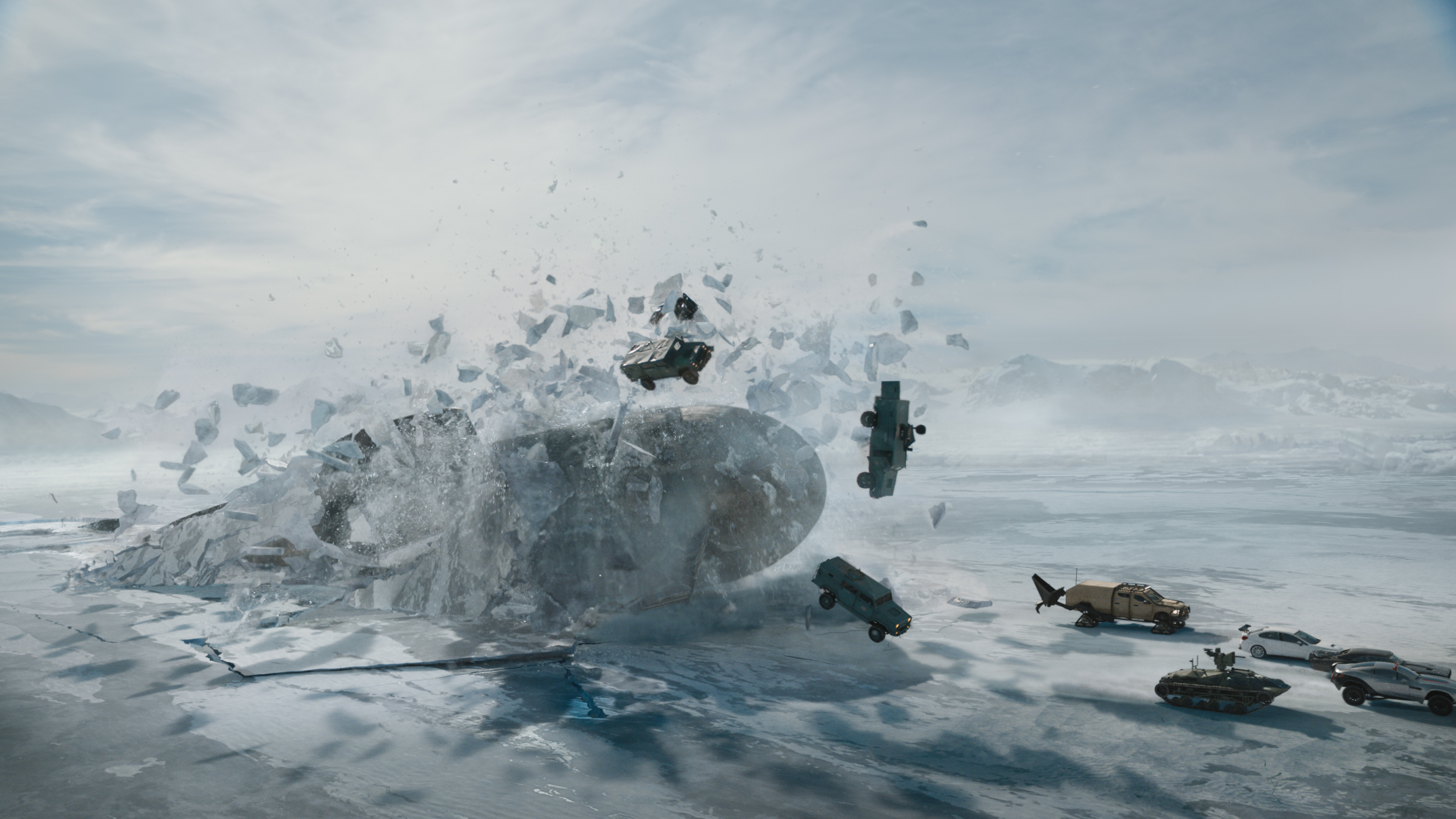 And with visual effects by digital Domain.

Perhaps the most thrilling moment in the third act comes when a submarine breaches the ice surface and sends ice and vehicles flying into the air - it was dubbed the ‘roller coaster’. The shot production at Digital Domain began with a low-res rigid body dynamics (RBD) sim in Houdini for the shattered ice in order to get a buy-off on the timing of the ice breaking and how it would interact with the cars driving on top.

“That was passed to animation to adjust tires and move cars around if needed,” explains Digital Domain FX lead Victor Grant.

“Once we got that back from animation we ran the secondary shatter sim for the ice that was much higher res and interacted with the cars. We’d pass the final sim off to lighting and again to anim for any final tire tweaks. This was all wrapped into a set up by Nardeep Chander for all the ice chase artist to use. Once that was complete we ran a suite of secondary elements (ice flakes, snow, water, and volumetric passes) that had been wrapped up by Tom Nixon and Nardeep Chander.” 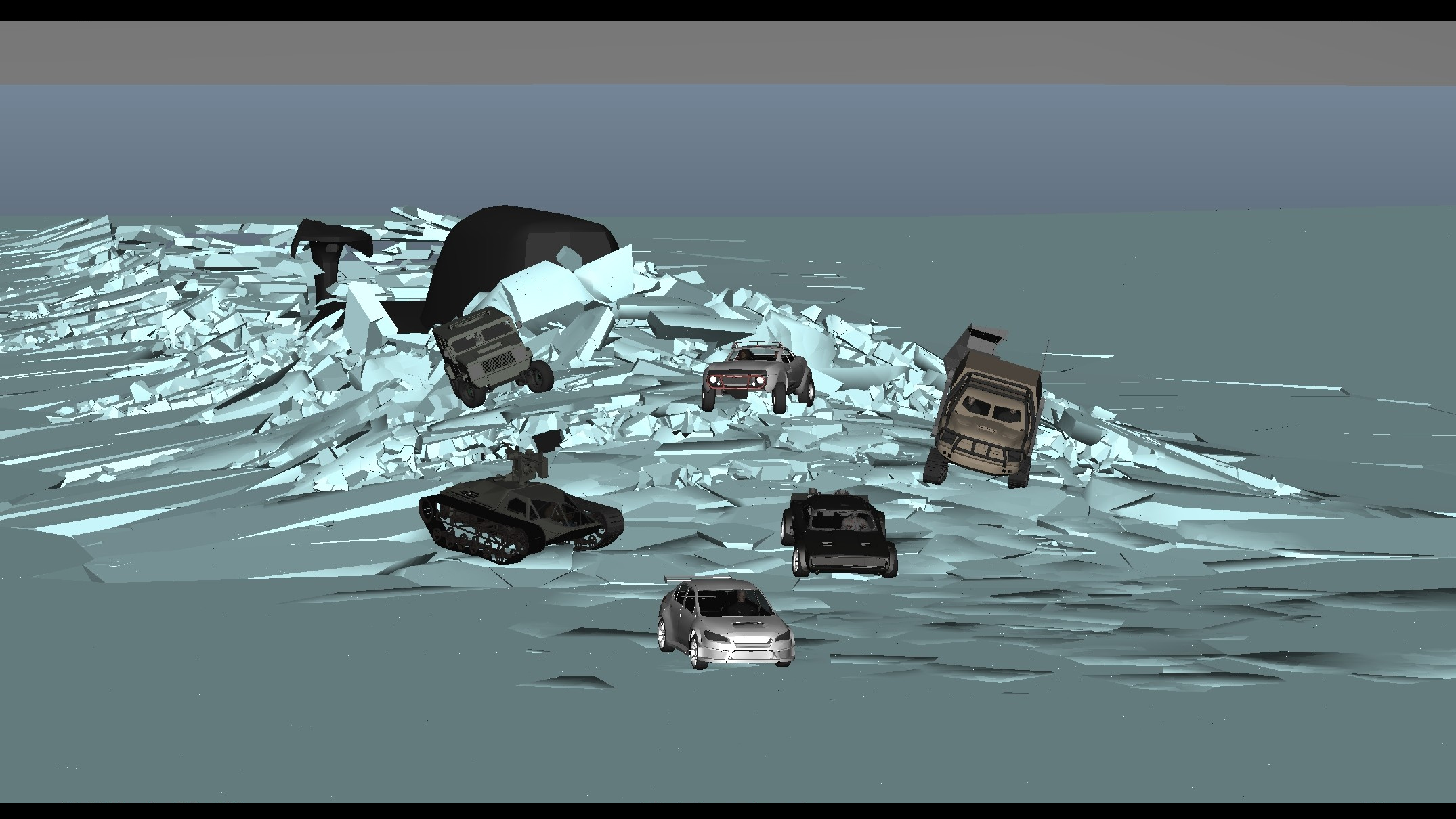 The submarine emerges out of the ice. 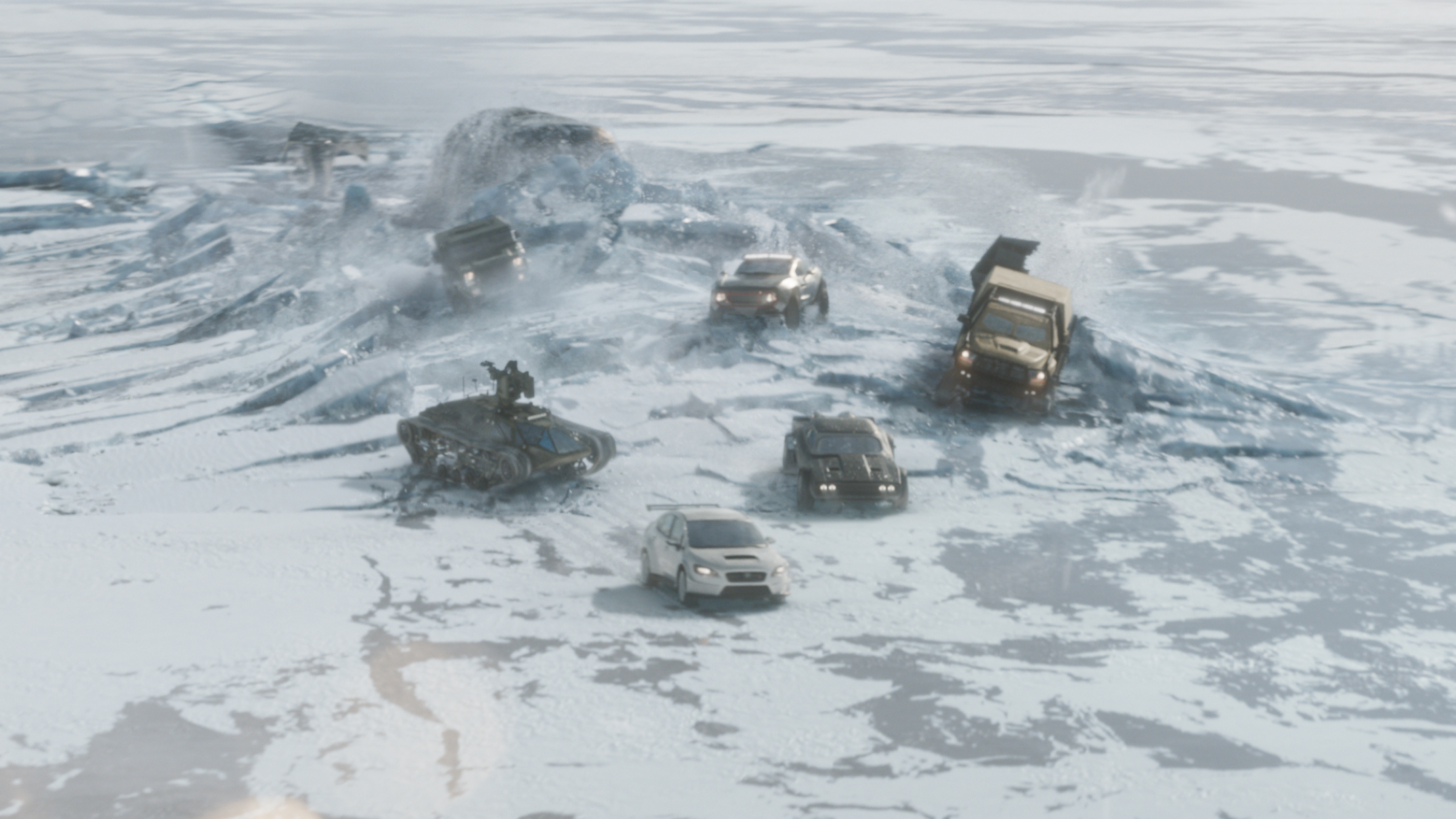 The submarine emerges out of the ice, final render.

Simulating the ice and selling the correct amount of weight was Digital Domain’s most difficult challenge on the roller coaster sequence. To get to a final look, Digital Domain looked to reference of icebreakers. Some submarine reference existed, too, but only of the vessels lightly pushing through an icy surface.

“The best reference we had by far, though, was the plate photography from the client of the initial submarine breach,” notes Grant.

“They detonated some explosives under an area of ice that had cars being pulled on cables above. It was filmed from a lot of angles at really high frame rate, so it was easy to study a lot of the details and elements we’d need to recreate.”

“We went through a few different styles of up-res fracturing as we developed the look,” adds Digital Domain FX supervisor Jeremy Hampton, “finally settling on a system that biased the secondary fracturing along the edges of the lo-res pieces. The final simmed ice chunks would break away in the weak points realistically, along the edges and corners, instead of just crumbling like clay.” 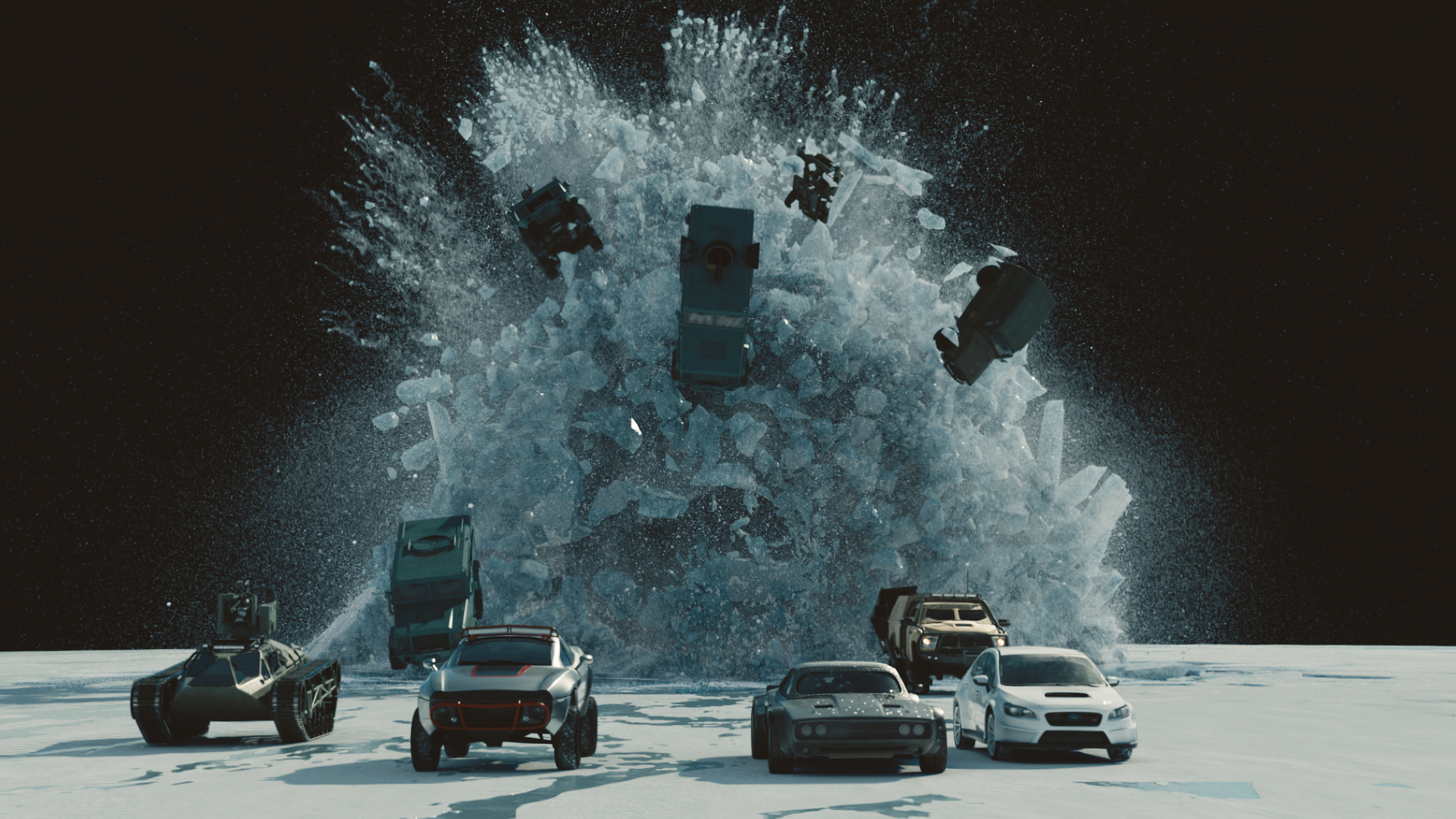 The breeching submarine part of the sequence was dubbed the ‘roller coaster’. 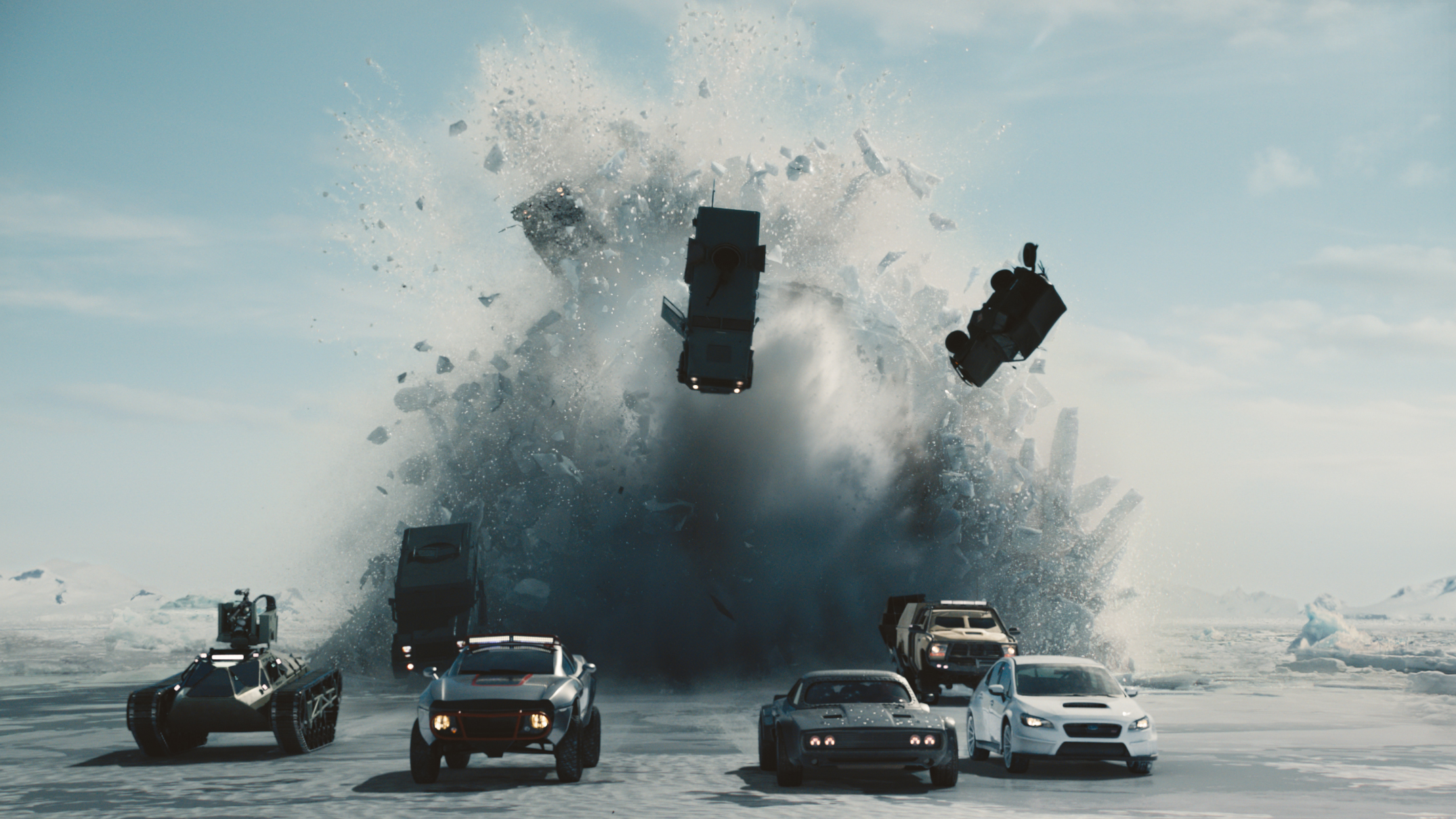 The breeching submarine part of the sequence was dubbed the ‘roller coaster’.

Extra water, snow and particulates were then simulated with FLIP and grains in Houdini, emitting from certain parameters on the base ice sim.

“Secondary elements were rendered using Mantra with a published rig from the lighting team to match shadows,” explains Hampton.

“We also created a setup to add FX ground snow grains to the top faces of all the Hero Ice. This ‘Skeel snow’ - by TD Skeel Lee - as we called it, was the final touch that helped get these shots finaled.”

What was particularly incredible about the roller coaster work was that it was actually assigned to Digital Domain late in production. But, with an efficient pipeline and strong reliance on their Houdini set-up, the studio was able to pull it off.

“We had very little time to create believable RBD sims to continue the animation finaling process with the client,” says Hampton.

“The multi-stage RBD up-res’ing that the team set up allowed us to get initial sim buy off quickly, and then we could iteratively add up-res steps to the sim, without drastically changing the approved animation.” 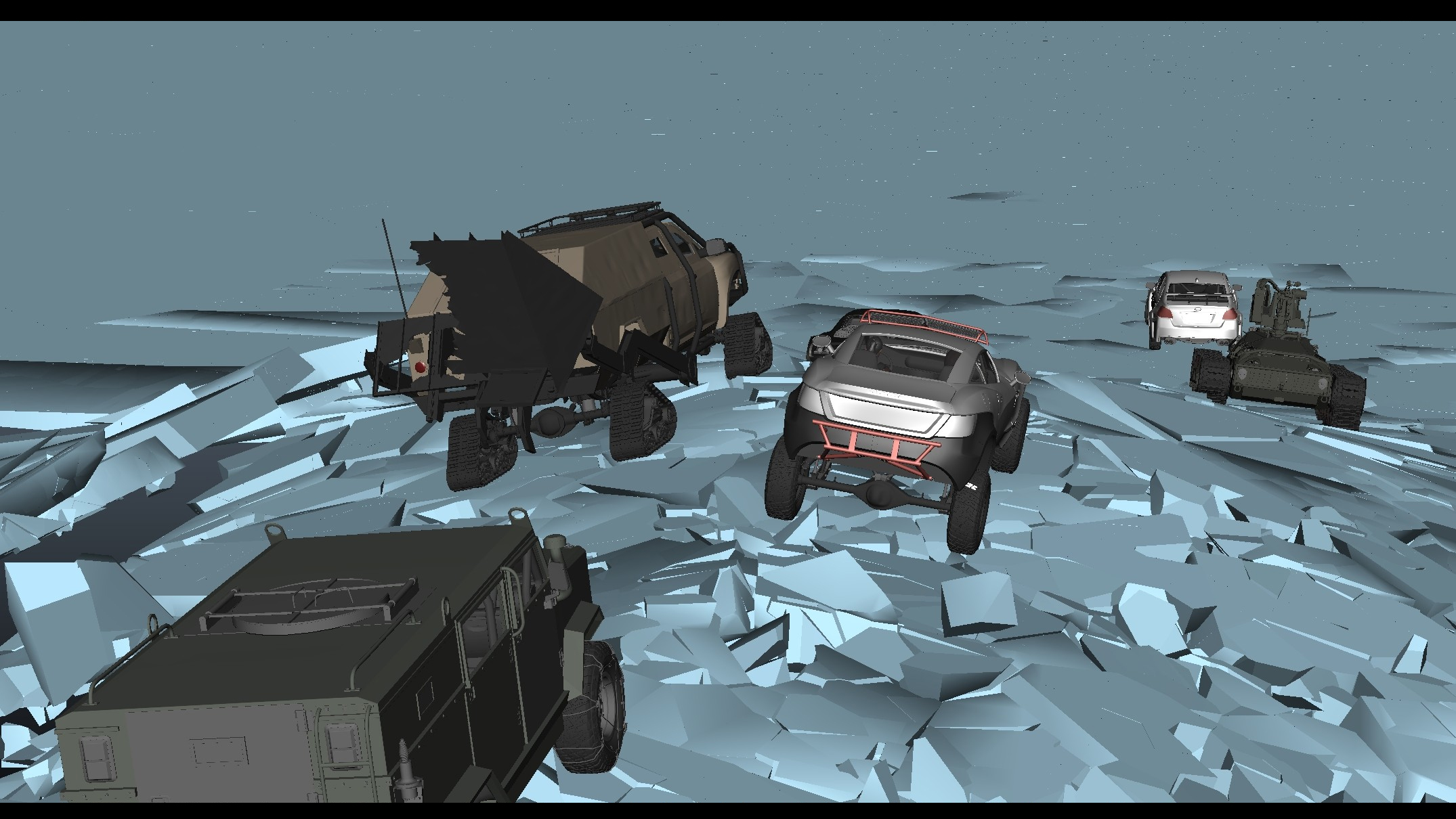 The vehicles atop the submarine continue along despite the actions of the vessel. 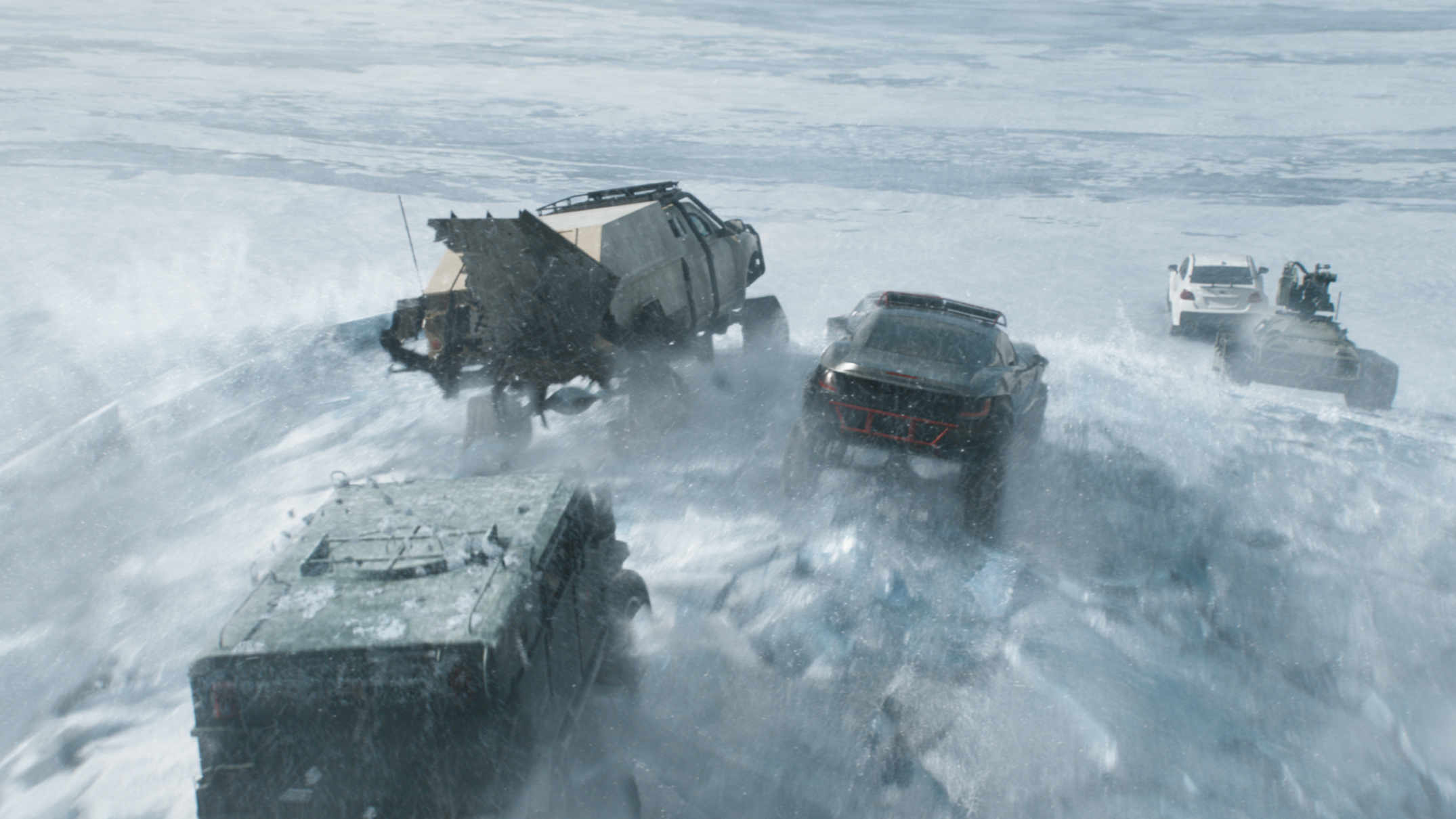 The vehicles atop the submarine continue along despite the actions of the vessel.

Just as the submarine sequence benefited from practical elements, so too did other chase scenes on the ice, especially those involving explosions. Still, Digital Domain augmented scenes with FX Pyro enhancement or replacement in Houdini.

“We leaned on the pyro solver, as we have in the past, to create fire and smoke,” describes Hampton.

“We took advantage of our heaviest RAM machines to run very hi-res sims, with well thought out combustion and shaping settings. The final explosion sims looked very realistic and were rendered all out in various AOVs for the compositing team to be able to tweak the look.” 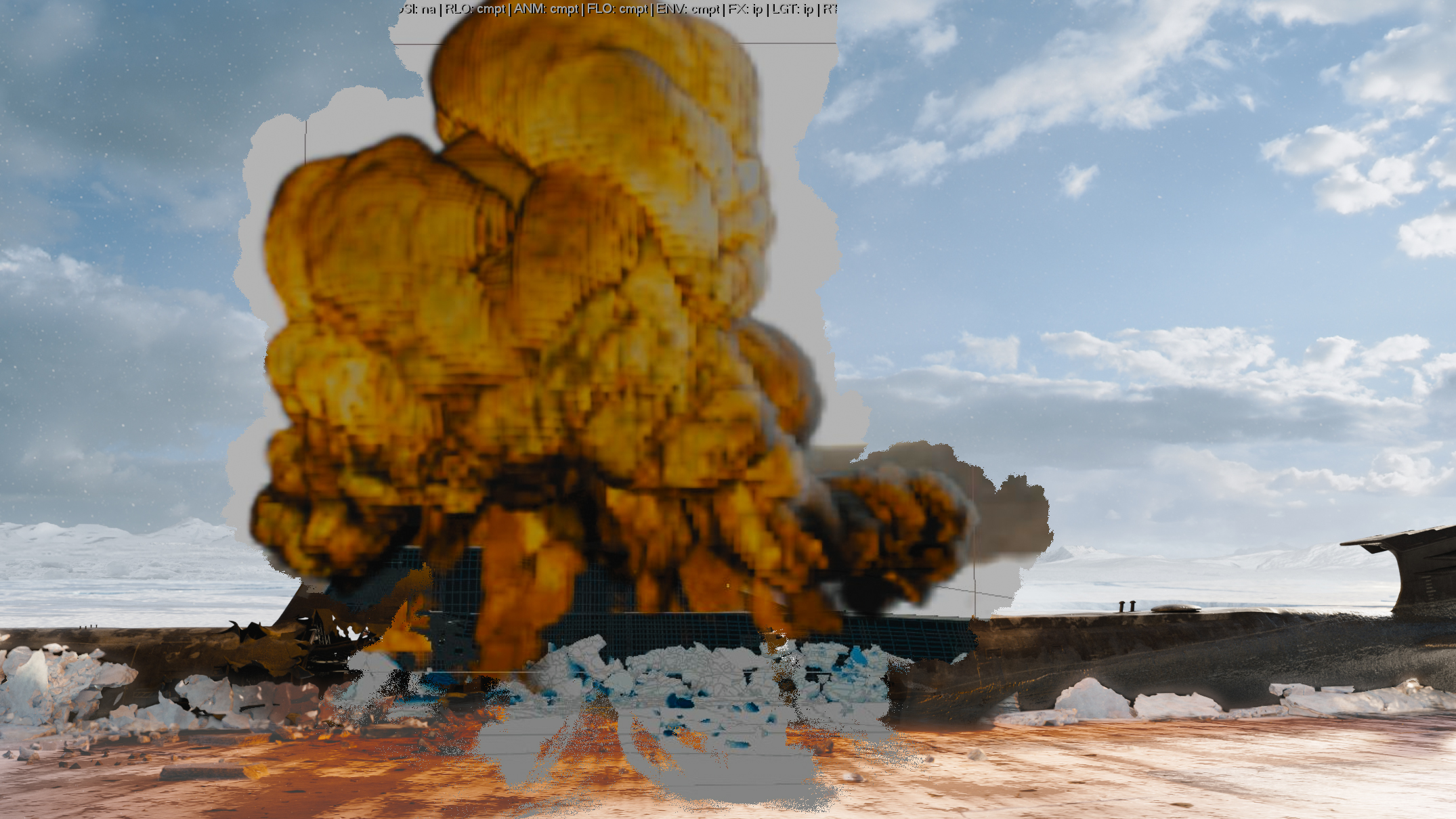 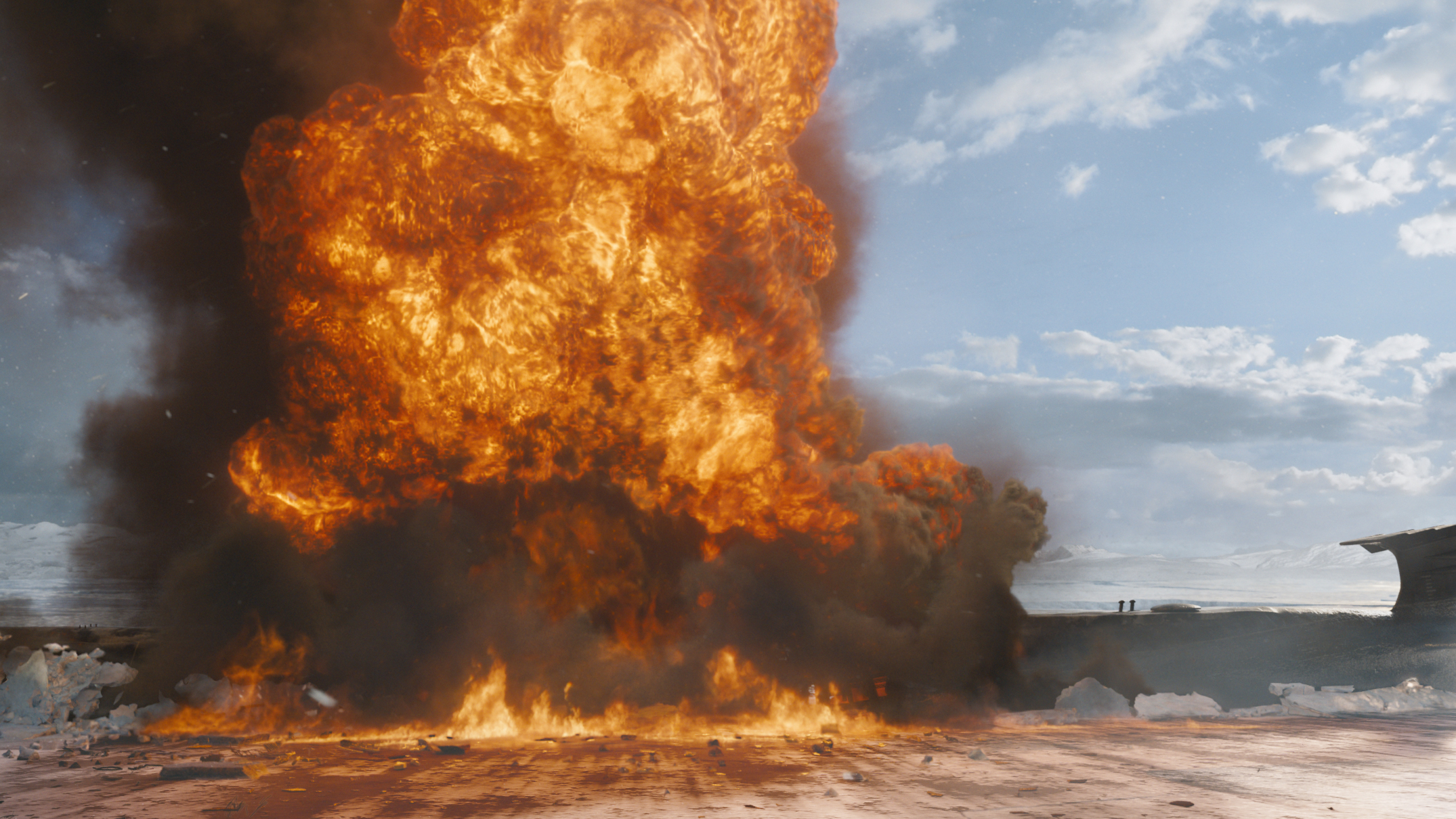 Being able to match the practical effects, and extend upon them, in Houdini was something Digital Domain has mastered in recent visual effects deliveries. The studio has also been able to capitalize on working inside the software as a large team, a major benefit on a complex show such as this one.

“Complicated set-ups could quickly be turned into Houdini Digital Assets (HDA's) and used by the whole team,” adds Hampton, on the role of Houdini on the show.

“For example, our HDA's for generating snow tire trails and volumes, were easy enough to operate that a junior artists could throw multiple shots on the render farm each day. We were able to get fast, predictable results for our volume and pyro renders. We were able to utilize packed geo to work with huge data sets that would cripple other programs.” 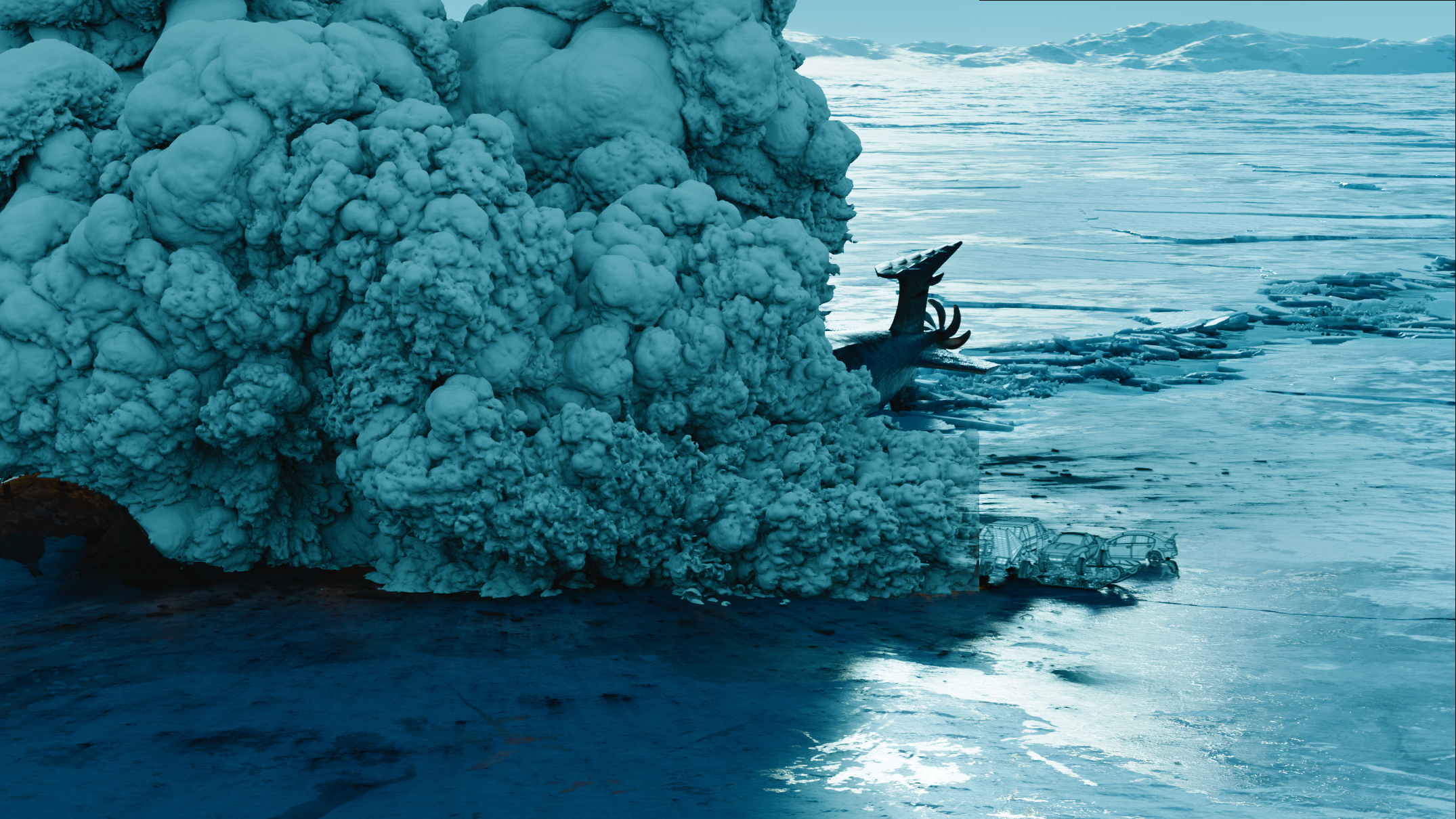 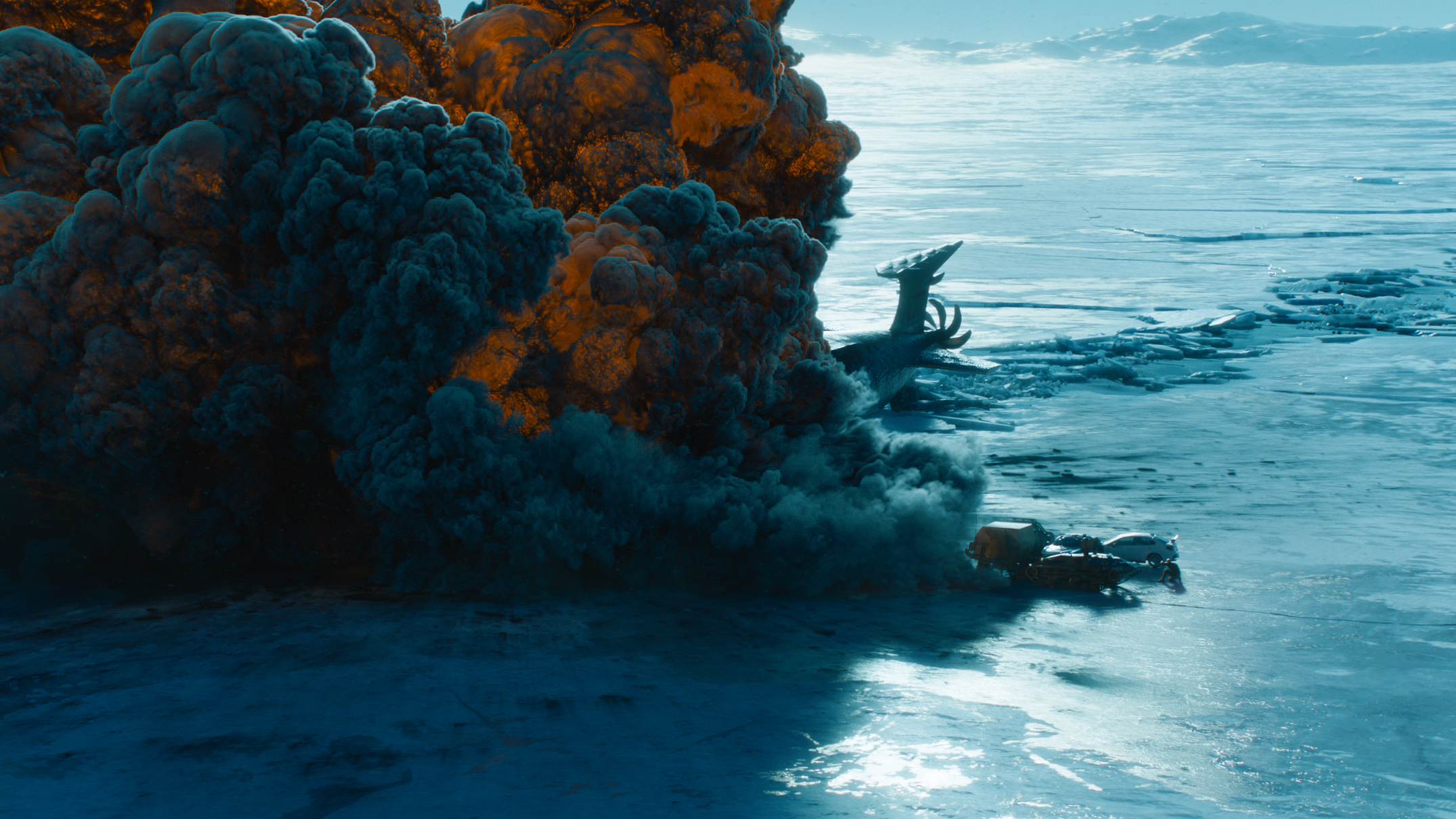