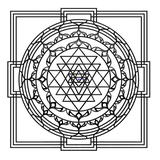 The bounding box isn't the outer enclosure that encloses the geometry.

It also considers the empty void between the geometry and the origin?

It doesn't consider the 'void' the way you think. It's not the bounding box itself with the void.

Put the following in a wrangle set to detail, and look at the detail geometry spreadsheet of the values.

There's nothing wrong with your syntax. Probably the issue is the context you are working in.

One of the 'issues' is that you are running over points in your wrangle.

In your common_tangents node you have:

I haven't studied your algorithm for the circle tangents so I don't know if you need two lists of points but if you do, just do the wrangle in detail and create two lists with the function done twice, reversing the point number reference.

As for your lines wrangle, again, haven't studied the algorithm but I suspect you need to do that in detail as well and you seem to still be in the prototype stage with your function as you are using invalid subscripts(e.g. .a,.b,and.c) on floats that you are looking at as if they are float arrays. You are also seemingly only interested in 3 elements(.a,.b,and.c)of the array constructed in the previous wrangle step yet those arrays have more than 3 elements.
VIEW ALL POSTS