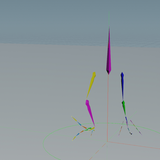 I haven't tried it yet, but this seems to be the answer to my problem and wanted to link it here in case someone else has this issue. Modifying the param file like in the versions before but renaming the libs to 3.9 is new.

Thank you for the answer. Nice to hear that a 3.7 version will eventually be released. I am actually quite suprised how stable the ARM version is running. Not because I don't trust in SideFXs ability but because it's still so fresh and labeled as a Preview

It makes sense to me that the Python version shouldn't matter since it's just starting hython but I definitely remember Deadline needed specific patches to work with the Python 3 version of Houdini. And that took quite a while. (Maybe it was just the submitter though that needed patches so it might've been unrelated to the rendering issues I have)

I don't have Python installed on my Mac or PC so I assume it can't be a variable that was set by a Python installation. But I will investigate further when I find the time. If you got it running before then it probably is a faulty setting on my end.

I was stumped for a while why Deadline did not work on both my PC and my Mac until I realized I had Python 3.9 versions of Houdini installed. Easy enough to install the 3.7 build on Windows but Apple Silicon versions seem to be only 3.9 if I am correct.
I understand that Python 3.9 is the new reference platform target (and Apple Silicon versions are tech previews), but will it be realistic to offer both versions?

To be honest, I am kinda concerned about Python 3.10 being drafted to be the new standard in 2023 already. If every single tool has to get updated now each year that could cause some big issues. Many side projects would probably cease to exist. (I am not deep into Python and the changes so maybe it won't be an issue? If someone has more information I would love to know)
VIEW ALL POSTS