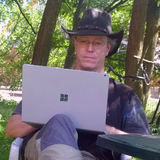 Expertise
Generalist
Location
Germany
Website
https://www.marc-albrecht.de
Epic? - Yet even MORE "Indie" gamers? Houdini is a Python grave of waitstates already - I am out. Accepting paid jobs, but not working for "good will" any longer. Good Bye.

Ah, “render in camera space” sounds like they are then first applying the camera matrix to the world space construction before projecting textures - that would get around massive floating-point issues that you would have with such huge scales (assuming you are using meters / SI units in the scene).

It *might* help to use a scene dependent unit like “diameter of the sun” instead of something like meter or kilometer. However, I fear that with the differences in sizes and distances in a solar system, ANY “fixed” system will run into limitations if you want to apply really fine detailed textures - I haven't looked at your source data, but I assume you are using meter/kilometer sized pixels there and are trying to project those onto immense areas. That's always going to be a problem, don't even think about SIMULATIONS with specifically tailored solvers for such setups :-D

the “broken” images don't look like they are showing a problem that a filter could fix, instead, they look like a stripe-offset-error in reading/displaying the actual data. It might be coming from your UVs (could, maybe, be a floating-point issue?) or could be a bug in RS.
Have you tried narrowing down if the error appears on a simplified model (like a plain grid)? If it also appears there, have you tried exposing the issue in the Red Shift community?

I am not quite sure that I fully understand what you are saying - it's not exactly my “job” to post to some social media sites or pay for Google Adwords to make Houdini users see a Houdini extension being tested, is it :-)
This forum here is the core Houdini user meeting place - where else would I post about a Houdini project? Every minute I waste on some third party website is a minute lost for the project. ONE forum: Fine. Wasting time posting on the interwebs: Not fine.

To clarify: I have shut down the DAZ bridge (without the limitations that the current DAZ bridge impose, my idea was to actually convert the DUF files) because of ZERO INTEREST (I have made it pretty clear what I consider “interest”, anonymous postings here in the thread are NOT what I count as “interested users”).
I have NOT ended work on the FBX helpers. That project is pretty much alive, but is concentrating on usability in future Houdini versions right now for reasons that will become obvious soon enough.

> 3 feedback from 30 is actually a pretty cool turnout.

Well, you're free to have a different perspective on that, of course :-)