SideFX is pleased to announce the release of Houdini 15.5 with an improved workflow for modelers, more accurate crowd controls, a new VR lens camera for rendering to industry-standard formats and support for third party rendering in Houdini Indie.

Houdini 15.5 delivers great production-inspired features both to our established community and our emerging user base. There’s a lot more included than in a typical point release, as we’ve been able to finalize a wide range of features well ahead of our major release schedule.

The focus on games is no longer just about Houdini Engine – with the addition of tri-planar UV projection, UV bake curvature and tighter UV packing, my dream of procedural triple-A content baking of hundreds of props overnight just got one step closer! SideFX listened to user feedback and took the time to completely rewrite the Dissolve SOP, which now produces stunning results. This level of commitment to continual improvement of new and existing tools warms my heart.

Modeling Tools such as PolyBevel, PolySplit and Dissolve have been rewritten from the ground up to add key features and optimize experience for modelers. Retopo tools now have splitting, straightening, edge loop and brush tools for positioning and relaxing points. New straighten, distribute points and make circle options are now available when editing points.

The new crowd solver is incredibly powerful and FAST! SideFX has done a brilliant job in really engaging with artists working with crowd systems, and has developed a comprehensive toolset that can handle complex simulations – but is also easy to customize. The new foot locking mechanism in 15.5 and improved terrain adaptation alone are incredibly exciting and fun to use. Loving it!

The new VR Camera is based on a VR lens shader that lets you render VR images to forms such as Latlong spherical projection, perspective Cube Map or a stacked Cube Map - 3x2. The camera lets you set the eye separation and eye-to-neck distance, and can be used to render to Houdini’s built-in Mantra renderer.

Houdini 15.5 also brings Third Party Rendering to Houdini Indie. Now independent artists and studios can use RenderMan, Arnold and OctaneRender in their lighting pipeline along with Houdini’s built-in Mantra renderer. Houdini Indie support will also be available for V-Ray, Redshift and Maxwell. 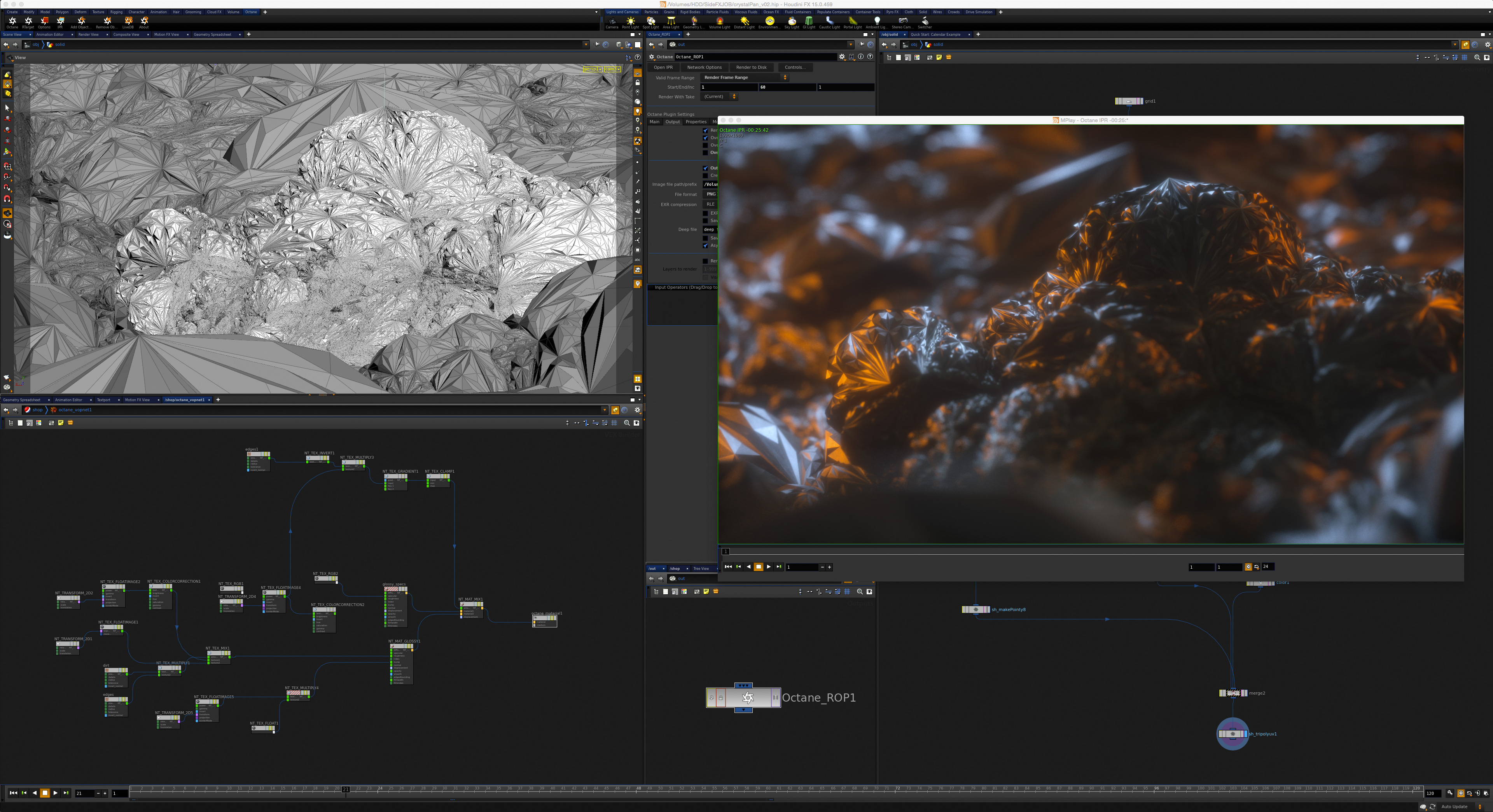 Rendered in Houdini with OctaneRender by Simon Holmedal

This node is used smooth out or relax the effect of point deformations using a copy of the geometry before it was deformed. This is used in character rigging to create better deformations in areas where extreme bending occurs.

The UV Tri-planar Project VOP lets you quickly assign colors and texture maps without the need to define point or vertex UVs in geometry attributes. The Curvature VOP computes the amount of surface curvature and is useful for masking raised edges to expose scratches and dents.

Houdini 15.5 can be DOWNLOADED from SideFX.com immediately.

New QUICKSTART tutorials are available to check out the new features!