Part of the process: Houdini and The Lion King

When Jon Favreau’s The Lion King was released in 2019, it represented a number of significant landmarks in visual effects. Not only was there a large virtual production side to how it was envisioned, the film also relied almost completely on photo-real CG characters and environments crafted by MPC Film (only a single opening shot was live-action).

This photo-real world saw MPC Film rely on several tools and techniques, including SideFX Houdini for procedurally building environments, for helping to simulate the fur of many of the film’s animals, and for simulating certain naturalistic phenomena such as water, fire and dust.

Members of MPC Film’s team break down where Houdini fit in those various areas of The Lion King’s production.

Many films with a large amount of visual effects work tend to use fully synthetic environments, while also often relying on digital matte paintings for perhaps the furthest from camera areas. On The Lion King, however, the entirety of the digital sets - such as the Pride Lands, the Elephant Graveyard and the Cloud Forest - were fully 3D.


Here, Houdini was used to create both procedural geometry and procedural layouts. For example, the canyon in which the wildebeest stampede occurs was built by MPC Film’s Environments team using modular cliff pieces, sculpted by hand, and then merged and joined together using procedural geometry.

“Houdini was used to process the shapes and using both ambient occlusion, height fields, and procedural noises and masks,” explains MPC Film digital sets lead Marco Rolandi. “Additional procedural geometry was also created; a typical example is the sand which sits between the rocks and the cliffs. This additional geometry as well as the original sculpted pieces were used as a target for a pass of procedural layout, scattering millions of instances of rocks and pebbles.” 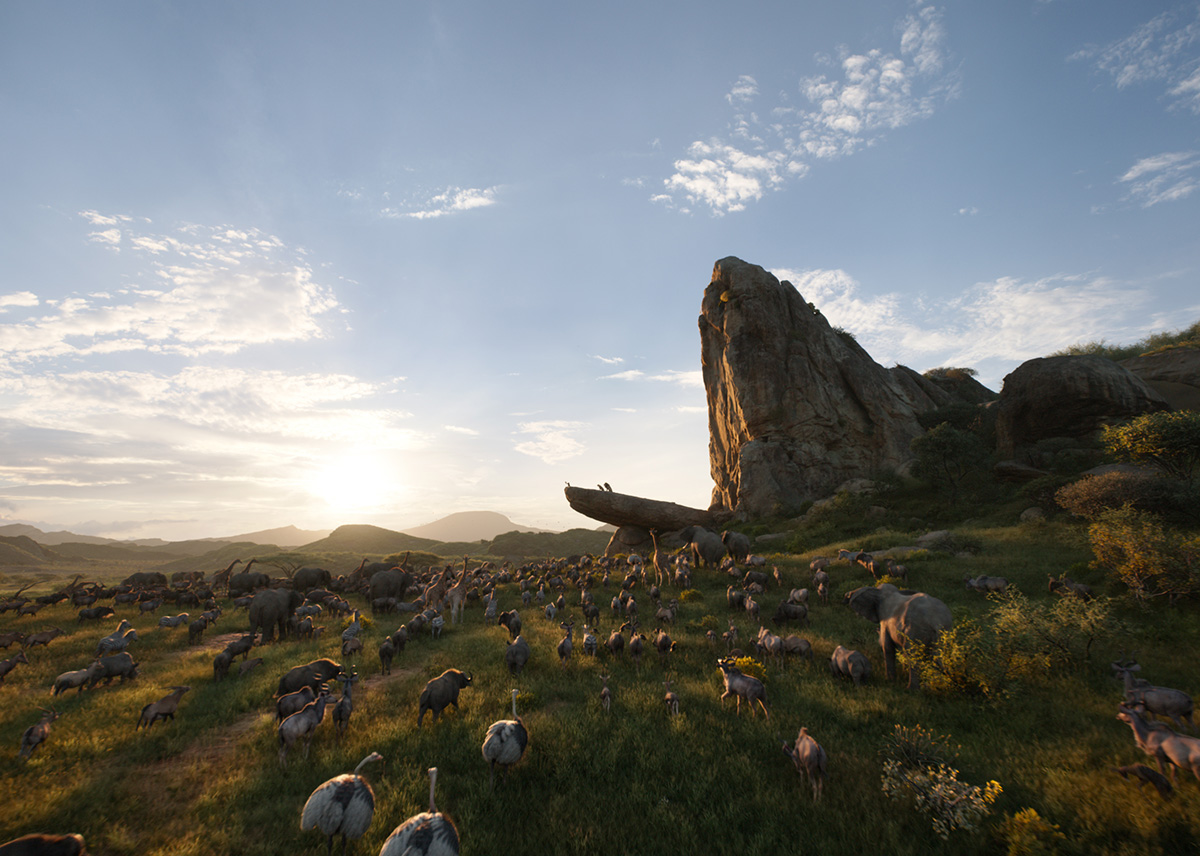 
Another key location, Pride Rock, saw Houdini utilized in a similar way. “We created procedural ‘glue’ to link different pieces together, but at the same time it was used extensively to create the layouts for grass and vegetation,” says Rolandi. “Using the ground and rocks as a target geometry, we scattered the first big assets such as the rocks and bushes, then using the same ones as attractors to scatter numerous instances of smaller objects like pebbles, small plants and grass.”

Already having furthered its fur sims for The Jungle Book, MPC Film took their fur to a whole new level by providing the Technical Animation department with a full integration of the studio’s proprietary fur grooming software Furtility in Houdini.

“This gave us the unique opportunity to combine the strengths of our procedural grooming software with the node-based workflow and simulation capabilities in Houdini,” wrote Kai Wolter (https://www.mpc-rnd.com/the-king-has-returned-advancing-technologies-for-the-lion-king/). “Using Houdini’s new Vellum solver we could produce more detailed simulations more efficiently. Recent advances to Furtility’s procedural workflow gave the artist a higher level of control over the dynamic hairs and data of each groom based on the needs of the shot.” 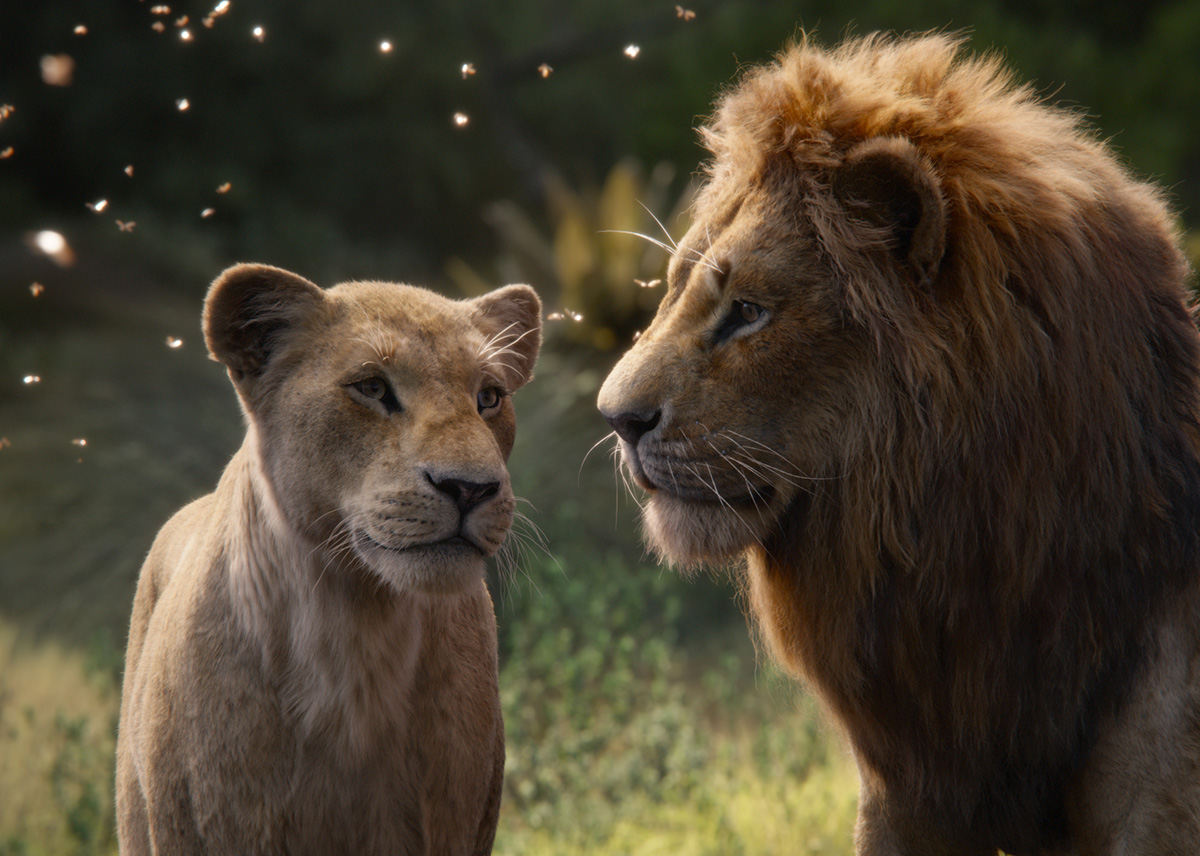 
Wolter also notes that “all groom attributes including e.g. wetness, were exposed as native Houdini attributes to the artists allowing them to drive simulation setups and override properties of the groom when needed. The changes were layered on top of the groom and eventually also exposed to our lighters in Katana enabling them to make further modification if needed.”


Ponds made use of Houdini’s ripple solver in which a flat plane was deformed with ripply patterns originating from source point. For the streams and rivers, MPC Film artists first created a ‘narrow band’, meaning they only simulated the very top layer of particles and then extended the depth down.

“This helped avoid unnecessary computation below the surface where we didn’t need to see too much detail,” outlines MPC Film FX lead Samantha Hiscock. “The flow came from a custom velocity field created using smoke emitted along a curve. This creates natural looking fluid motion with eddies and swirls. Finally we added a layer of floating leaves to make the river look even more realistic.”

Waterfalls were simulated using Bifrost and Houdini, with a similar approach relied upon for both approaches. Artists added in custom collisions, sculpted rocks and turbulence at the point of emission - i.e. the ridge at the top where the water falls from - which would create interesting shapes. Then, the liquid pass was used as emission for whitewater only. This was because, says Hiscock, “we found that waterfalls of this scale very rarely have visible blobby surfaces, it is mostly aerated by the time it falls.”

“We had multiple layers of foam and spray with varying forces and consistencies,” adds Hiscock. “For example, one layer would have very ballistic, misty behaviour and another layers had less drag as the particles clumped together, so as they break away from the group they drag more, creating chevron like patterns that you see in tall waterfalls such as Seljalandsfoss in Iceland. We would build up multiple whitewater layers until it felt substantially heavy, and then supply parameters such as density, age and velocity to Lighting so they could shade the layers appropriately. We worked closely with Lighting to balance these attributes so we could create something as physically correct as possible.”

A key sequence in the film was the wildebeest stampede. Apart from the use of Houdini here to create the canyon area, MPC Film also relied on the tool to generate rocks, dirt and dust kicked up by animals and adding to the chaos of the scene.

Simba, too, kicks up a lot of debris as he frantically digs his paws into the dirt trying to hide from stampeding feet. “For hero shots such as this,” relates Hiscock, “we would create fine detail, high resolution grain sims in Houdini that would compact down or break up underneath Simba's paws, and also interact with another simulation of the rocks and debris sitting on top.”

For the dust coming from the wildebeest stampede itself, a different approach was needed to handle both the amount of animals and also the huge area that was covered.

Ultimately MPC Film would generate several layers. For the dust being kicked up from the wildebeest, the team utilized an automated script that would run for every shot and find the intersection points between the feet and the ground, and use this to know where to instance dust kicks from a library of pre-simulated caches. Says Hiscock: “This was incredibly efficient as it meant we didn't have to simulate every animal all at once in a huge area and the kicks didn't need to interact with each other.” 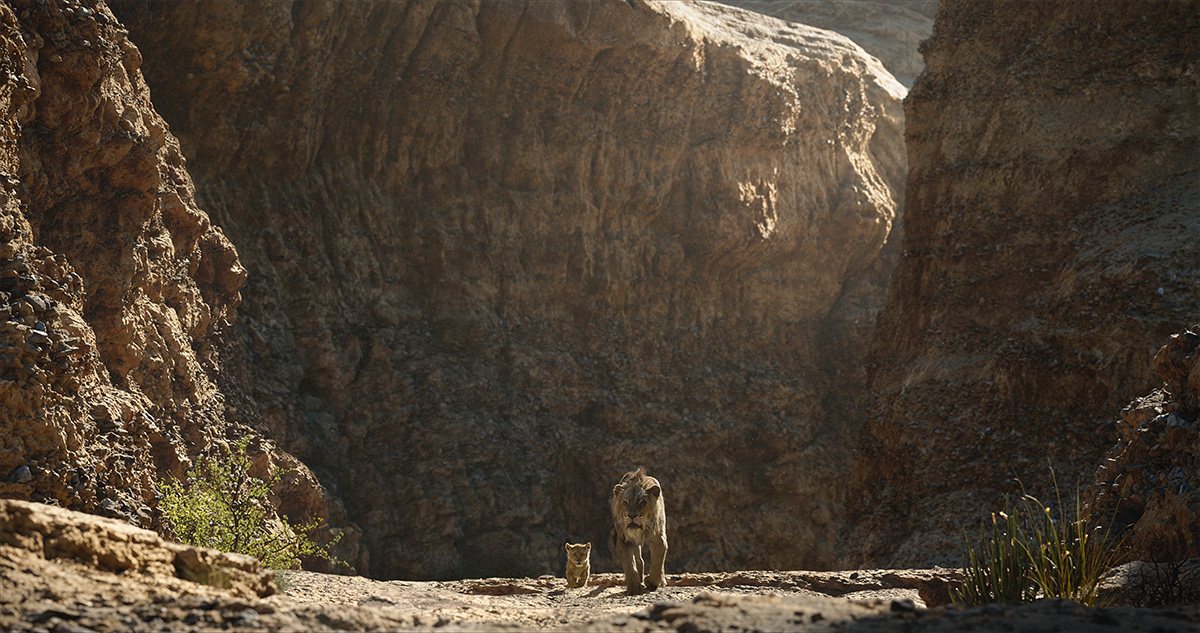 
The next step was the creation of repeatable 'ambient' layers that would fill in the remaining space to give the impression of dust being built up over time. These were generated first and then placed where needed on a per-shot basis. There were also hero dust kicks, as sometimes one animal would have a unique animation, for example, skidding on something or tripping or falling, so MPC Film would have to run an isolated dust FX sim for this.

“Finally,” rounds out Hiscock, “we had setups for the climatic part of the sequence where Scar kills Mufasa, where rocks scattered by environment would become dislodged from the cliffside. This helped to sell the scene and make the environment feel unstable and precarious with rocks breaking and falling beneath Mufasa's paws.”


The art of fire

The Lion King’s climax sees Simba and Scar battle it out while a fire rages around them. This, of course, was another simulation requirement for MPC Film for the flames and smoke. The team approached the work in a similar way to the stampede dust, by crafting a library of caches and then placing them in every shot or parts of the environment where they were needed.

“We spent a good amount of time working on the look of the fire,” discusses Hiscock, “with senior artists working hard to create a very detailed and high resolution sim, then varied a few key parameters such as turbulence and shredding amount, to create variations in our library. We also created a few size variations - small, medium, large - so the same cache could be reused as much as possible.”

The fire was split up into the main flames, smoke layers emitted from this, and then supplementary embers sims that could be placed elsewhere in the shot to give the indication of fire engulfing the entire environment. “A lot of it,” says Hiscock, “was about finding the balance between making the environment appear hazardous but also not obstructing the action. This is why we chose to have artists hand placing caches in every shot and layering them up to create an interesting composition.”

“The fire itself was incredibly heavy to render,” continues Hiscock, “so all of the fire caches in the scene were broken up into key layers to be able to manage them as easily as possible in both FX and Lighting.”