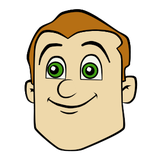 I made several renders, the first one always takes a bit longer!

I made an SSS test by turning off transmission and turning on Subsurface Scattering, looking good for a quicky, rendered on AMD 8 Cores and a RTX 3060 !

I have updated my rhino test scene for Houdini 19.5, link to the file below...

On Windows the RTX 3060 is about 3 times as fast as the GTX 1650, while on Linux it is about 2.4 times as fast, both Windows and Linux uses the latest Nvidia drivers, the memory usage is also quite different, no idea why.

EDIT: I made some tests with Blender's Cycles and the RTX 3060 can be as much as 4.6 times faster than the GTX 1650, depending on settings, so my guess is that Houdini XPU will get better over time!
VIEW ALL POSTS