This is an ongoing episodic piece that I'm making called Broken Angel (working title). It is an attempt to bring music and abstract (ish) CGI together in a variety of interesting and/or affecting ways. The idea with the episodic thing is for three reasons; the first is that it's much easier to split such a big project into segments and actually finish things. The second is that I thought it'd be an interesting idea to take an almost "madlib" approach (or like these drawings you did as a kid where you make funny monsters on a folded bit of paper), where I end each episode with the first frame of the next episode, and vice versa with the start. Although the whole thing has been sketched out, the details of each episode will dealt with episode-by-episode. Finally, I wanted to have a different theme and style to each episode, whilst maintaining a continuous (albeit loose and abstract) narrative.

This episode is placed between the 3rd and 4th, hence "episode 3.5". The reason for this is that what I planned initially for episode 4 turned out to be quite a large journey with very distinct moods, as well as being too much work for one block, so I split it in 2.

This episode is much simpler than the others in terms of audio interaction, mainly just using the piano to control flashes of light in the clouds. I wanted this to be a change of pace, and let the peaceful music breathe with the visuals, something you don't get very often with CG visuals, due to render times.

All 3D in Houdini (rendered in Mantra), 2D in Nuke, a little bit of After Effects. 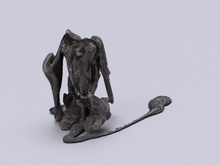 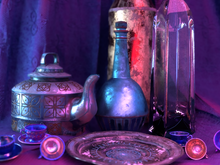 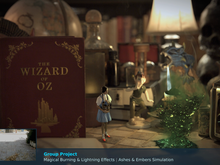