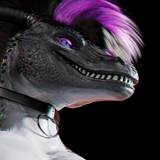 Is there a different workflow I might use to import these materials?

Here is my wild guess as to what we might see in H19. At the beginning of the release talk for H18.5, Cristin Barghiel stated that SideFX considers the current KineFX system to be only a starting point for character animation in Houdini. Houdini 19 could become "The Character Animation Release" if they have invested time building the right tools. If they add a robust procedural system for creating animation controllers, improve tools such as weight painting and blendshapes, speed up viewport playback with GPU node evaluation, and revamp the (horrible) graph editor and animation UI to make it fun for animators, they could plug one of the biggest gaps in Houdini becoming full-pipeline software.

I am eager to escape the clutches of Maya so this may also be a bit of wishful thinking. But it could happen