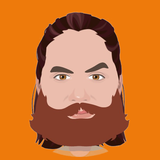 It is already merged into sidefx labs project(https://github.com/sideeffects/SideFXLabs). Thus, not sure if it is the latest version..

Honestly, I have no idea. The weight map should look like a thickness/density map. If you combine that with skeleton curve partitioning(limb partitioning) you might get some localized effect similar to the biharmonic weighting. I don't know..

BTW, @lkruel did a great job of integrating a 3d skeleton solution based on this stuff into the game toolset. Luiz, thanks! ..and a thumb up emoji would be nice in the comment section