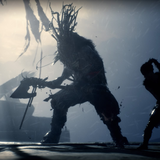 Double check your import settings to make sure you are replacing the Vertex Colours when you import the mesh. 9/10 times thats the cause of bad rotations

That is rendering out correctly now.

I have been playing around with the rbd impact data export for Niagara, and I have made an optimization to the rop that you might find useful.

I was finding that the default threshold controls on the rbd_solver for controlling the impact data were not good enough for generating usable data for a big destruction sim. Adjusting Time Threshold, Impact Threshold and Distance threshold always led to a large number of points clustered in small areas.

To reduce the number I added a simple Point Cloud Find attribute vop loop within the niagara_impacts part of the niagara_rop. Basically is removes any extra points it finds that are too close to the first point that is generated.

As I am still a bit of a Houdini noob, there may be a better way of sorting the list and making the groups, but I think it might be worth adding this kind of functionality into the default rop that comes with the game tools. As an example the scene I made generated around 4000 impact events, but after the cleanup it was down to 140, which is obviously way cheaper for generating sprites in engine.