CG Channel reports that the Chaos Group has released Beta 1 of V-Ray for Houdini, the new edition of the renderer for SideFX’s VFX-industry-standard 3D animation and effects software.

The current beta supports most of Houdini’s key features, including hair, fur, volumes, and many simulation types, and includes the new scene intelligence and GPU rendering features from V-Ray Next.

Together with V-Ray for Maya and Nuke, the new release provides a “complete rendering solution that allows look dev on individual assets to be packaged and easily transferred between applications”.

For an initial beta, V-Ray for Houdini supports a fair number of its host software’s key features.

That includes most of its native geometry types, including polygons, NURBS curves – although not NURBS surfaces – points, and some packed primitive types; plus instances, proxies, subdivision and displacement.

Houdini hair is also supported, although currently only as SOP geometry. The release also includes support for the new physically based hair shader introduced in V-Ray Next.

Volume rendering, both of VDB and Houdini’s volume primitives, is partially supported: it currently only works on Windows, and you have to load the files via a Volume Grid Cache SOP rather than rendering directly.

For transferring data to other apps, there is “full support” for Alembic, Houdini’s native .bgeo geometry caches, and critically, Chaos Group’s .vrscene format, intended for sharing assets between editions of V-Ray. 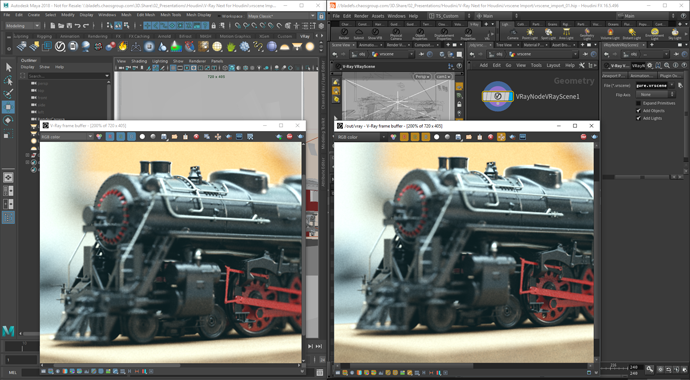 Easily transfer and override the properties of V-Ray scenes from applications such as Maya and 3ds Max.