Can anyone tell me if the Substance Archive COP is meant to work with Houdini 18 Apprentice when rendering? I can see the SBSAR file okay in the Compositing window but as soon as I try to use it in a texture (with op:/img/img1/sbs_archive1) I get the following error in the Houdini Console:

I'm no good at mantra/cops, so I don't know the reason for your problem. I tried doing what the substance cop tutorial did on an indie license but couldn't get mantra to accept the archive and get the same error you do.

Until you figure it out you can use a Channel Copy to take the channels out of the substance and put them into C.r/g/b.

Thank you very much for the workaround.

Has anyone got the Substance COP to work as expected? That is by referencing ‘op:/img/img1/sbs_archive1’ or something like it? If so which licence have you got it working with? Which platform might be handy to know too.

can not too, hope offical staff help.
Report

I was able to make it work by specifying the image plane like that:
op:/img/img1/sbs_archive1{diffuse}
Report

Manuel Gaudreau
I was able to make it work by specifying the image plane like that:
op:/img/img1/sbs_archive1{diffuse}

This is what I first tried. It's what they use in the preview video. Unfortunately it still results in:

Out of interest which licence are you using this successfully on?

Continuing the work of vandoornjerry and AndreG (many thanks to both) I've extended their ideas to create a more complete solution to this strange problem. I've attached it to this message. It adds some extra maps that seem relevant, in particular the Height map.

If you take a look I've created a subnetwork called get_material and moved the material into it using a material network. It's my intention to create a HDA to let us use the sbs_archive COP more easily. While preparing to turn this into a HDA I started to turn the material's absolute references (eg op:/img/comp1/get_material/BaseColor) into relative references (eg op:../../BaseColor).

When I do that it stops working with the following error:

I've continued my conversation with support (thanks for tolerating my lack of experience) and hopefully they can tell me what's wrong. I do note that the error has added an extra / to the path which may, or may not, be the problem.

Anyway, I'll keep you posted on this thread and I hope the attached file is useful for someone. I'm not sure if the Glossiness path is meant to be used as the Reflectivity texture so you may need to dive in and turn that off in the shader. Apart from that if you can cope with copying and pasting the set up for each sbs_archive you want to use then it's something of a solution but hopefully just a temporary fix till something better arrives.

i just get errors when trying to open your solutions.
Report

NicTanghe
i just get errors when trying to open your solutions.

Which errors? The file I put up is very intolerant of any kind of changes. Your sbs_archive needs to be 1024*1024 and your structure in the /img context needs to be the same.

Edited to add: You do also need to supply your own .sbsar file and point to it in the sbs_archive node. I don't have the rights to hand them out.
Edited by Jerry Hat - Dec. 7, 2019 04:28:31
- blog: http://www.jerryhat.com [www.jerryhat.com] - usually features Houdini these days
Report

Ok i was just confuzed becouse i dident spot the comp node in the node vieuw and only saw a uv project.

OK,this works,thanks.Though Not the best solution.

Yes, it's amazing how even something that is supposed to make shading easier like substances can be turned into something losing all benefits when used in Houdini

Not a viable solution to use substances in any software.

BTW I get the same errors when using the normal substance material SOP. So it's not just the new COP….
Report

I get the feeling that there's some context that works fine, and that's the context the Substance plugin developers work in, and there's one that doesn't which is where you and me are.
- blog: http://www.jerryhat.com [www.jerryhat.com] - usually features Houdini these days
Report

After a few days, with the help of Support, here is my current solution for using Substance in Houdini 18.

You may need at least 18.0.315 to use this, but I'm unclear as to whether the Substance COP had any errors at all (in this regard anyway) or it was just a case of me being unable to use it properly. Knowing me, probably the latter.

That said, I have to report, as other's have, that using the Substance COP does seem to cause a lot of apparently random crashes (some caught, some CTD) at least on my Win 10 machine. In addition going above 1048 in Size seems to cause problems and is quite slow. Of course, this is still in beta and we must always remember that.

Attached file is annotated for your reading pleasure.

Note to the above: this setup will only work if your SBSBAR has a Diffuse channel. Those which rely on the Base Color channel will not work. I've rejigged things so it should work with a Base Color but it doesn't, there seems to be a problem with renaming this channel.
- blog: http://www.jerryhat.com [www.jerryhat.com] - usually features Houdini these days
Report

Mantra looks for the C image plane. So you need a rename cop to setup the channel references. Or you can use the Substance material SOP.
Luiz Kruel
Senior Technical Artist
SideFX
Report

lkruel
Or you can use the Substance material SOP.

Simply using the Substance material SOP is so much simpler.

Renders to Mantra straight out the box.

I don't get any errors using the normal substance material SOP.

lkruel
Or you can use the Substance material SOP.

Simply using the Substance material SOP is so much simpler.

Renders to Mantra straight out the box.

I don't get any errors using the normal substance material SOP.

I don't see a uv_utilize, did you mean uv_unitize? I tried this, but it didn't work.

This is what shows up in the view port and also the error that came up.

Am I just not doing this right? So far nothing I have tried has worked. I tried using different UV nodes, I tried putting different things in different parts of the pipeline, but so far none of them have worked. I know the sbsar is good, it works fine in Unity, and also opens in the Substance applications.

I have yet to see even an image of a proper working setup so I can try and mimic the setup. Do I need to use specific UV nodes first? Do I need to just use the Substance_Material node, or do I need to have a cops node manually placed somewhere, or something in img?

I tried doing this, seen in the image below based on what I saw someone said, that didn't work for me either. 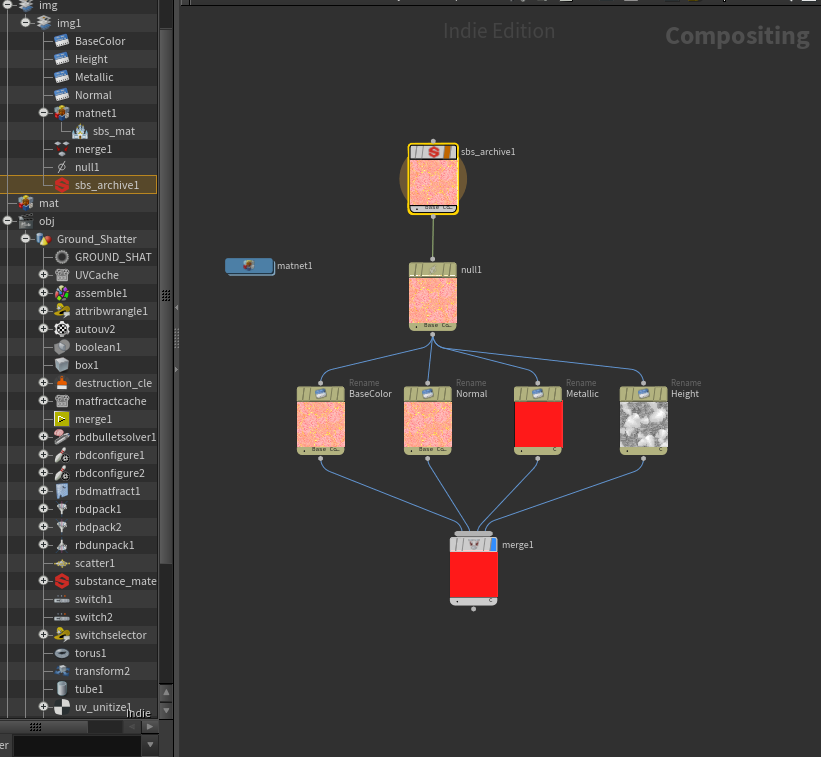 It seems so strange, Substance being a large procedural system and Houdini being the same, that there would be so much issue with them working together when Unity or Unreal work perfectly with them. I would think that Houdini, of all systems, would work great with it.
Report

It seems so strange, Substance being a large procedural system and Houdini being the same, that there would be so much issue with them working together when Unity or Unreal work perfectly with them. I would think that Houdini, of all systems, would work great with it.

The current situation is this:

1. If your SBSAR has a Diffuse channel the Substance Material SOP should work

2. If it only has a Base Color channel the Substance Material SOP will not work

3. Currently doing a rename of the Base Color channel to C in a COP set-up as you've done doesn't seem to work - I don't know if this is our fault(s) or a bug.

4. One of the guys working on the SM SOP knows about all the above and is looking into it. He's going to add a Base Color channel to the SM SOP and hopefully sort out the rename problem/bug.

Sorry I can't help directly. Any UVs will let your see the material, even incorrect ones like an Orthographic projection for a test. If your object goes pink but you can see the other channels are being respected then you've come across the problem.