I've a problem while using Houdini 19.5.435.
Why line wire primitives not visible when it not have face in viewport?
Is that a visual bug? I'm using onboard GPU - Intel UHD Graphic 630.

Building a little procedural setup:
Working with a simple 2x2 grid. My set up has an option for corner rounding with polybevel. All good.
However, sometimes my grid may be a square. In that case I'd like the maximum rounding to deliver a 'perfect' circle.
Because each rounded corner has a point at the end of the 90 degree arc, bevel collision avoidance seems to prevent rounding to a full circle.

Can anyone suggest an elegant solution?
Image Not Found
Edited by Mike_A - 昨日 10:59:07
See full post

Solaris » Animated topology to USD without caching a huge file

stitch clips for deforming liquid sims generate a topology file that writes a huge .usda file that is not necessary since its a deforming polysoup mesh and not an animated one.

How do you efficiently load a sequence of deforming geo into Solaris without Husk converting them into .usd files in the $TEMP% folder? this slows down the time-to-first-pixel significantly and increases ram usage by alot
See full post

mtucker
Here's a simple example file that uses BGEO files directly as value clips. The trick is that the BGEO files need to have a detail attribute added to them instructing the BGEO USD import plugin to generate attribute values at time samples at a particular time.

is this advisable for huge liquid sim caches? I couldnt make it work for deforming caches.
See full post

Numbers are not stored in decimal but in binary, and with limited precision they might not always line up to round decimal numbers. Houdini displays the number it holds in memory instead of a rounded version of it, as other software might.
See full post

click the little thingy with the parm name on it to switch it back to normal display mode. When the parm is in true display mode, it will show the actual value. In 32bit binary floating point numbers, 2.5 literally doesn't exist, it's impossible to represent exactly. Apps may print it out nicely, but Houdini can display it either way.
See full post

After update latest drivers from Intel and somehow it's work now. I'm sorry to bother everyone and if someone else have issues same as me, then try to update driver. And have a strong and modern graphics is always better
Edited by vuphanart - 昨日 18:47:17
See full post

vsamusenko
Soooo, 5.1 dropped, any news or maybe easy to use workarounds ?

Mike_A
Building a little procedural setup:
Working with a simple 2x2 grid. My set up has an option for corner rounding with polybevel. All good.
However, sometimes my grid may be a square. In that case I'd like the maximum rounding to deliver a 'perfect' circle.
Because each rounded corner has a point at the end of the 90 degree arc, bevel collision avoidance seems to prevent rounding to a full circle.
Image Not Found

Can anyone suggest an elegant solution?
Image Not Found

Just a remark on the polybevel / point / Shape: round
This does not produce circle arcs. It's producing some kind rounded path, good enough for viz to look like an arc circle, but it's not converging to a circle arc. - as of H19.5

Just in case you actually needed a circle arc, and somehow expected that Polybevel was trying to make a circle arc out of the point... The actual shape is never mentioned in the documentation

However, there is a trick to do it with polybevel: it produces an actual circle arc when used on an edge.
So you can polyextrude a 2D polyline, somehow group the edges that are in the ExtrudeSide group, and polybevel /edge / round said group.

As a bonus (because it's a surface), you can use all the options in the Collision Tab especially: Detect Loops, and Stop Loops: Simultaneously.

There is also a way using the new Curve SOP, which can, in certain cases, make nice rounded corners which are actually circle arcs.
The drawback is that it's an interactive tool, and I can't find a way to use it procedurally, at least with an input with a variable topology.

If you want to give it a try:
Grid 2x2 -> SOP Convert /Bezier Curve/ Check Interpolate though Hulls / <- this will create a Bezier curve that looks like the input, and has the right structure for the next step
Then Curve Bezier SOP
At this point in the UI, switch to select/ edit mode, drag / grab around all the points, and click create rounded corners in the viewport
Edited by alecaille - 昨日 16:16:51
See full post

Hello,
I have a simple setup with Vellum grain cube and sphere in the middle of it. When I play the simulation, the grains get pushed by the sphere and fly away as expected.
I am using Dopnet and I import the sphere using StaticObject and grain using VellumObject
However, when rendering the scene using Mantra to MPlay the big sphere is still visible in the render.
Can anybody please tell me how exactly can I stop this from happening?
I have searched the internet for a few hours to no avail.
I have included a .hip file so you can take a look.
Thanks a lot. 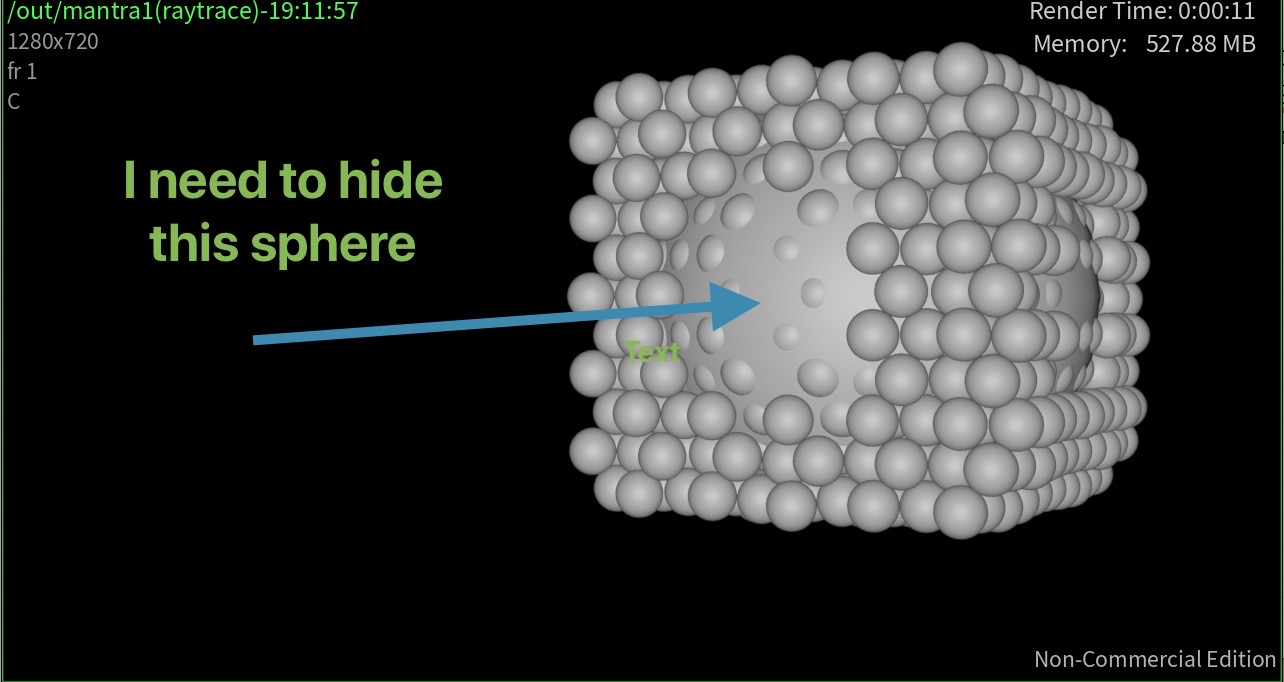 Technical Discussion » Launcher does not work

toonafish
2nd attempt today to use the Launcher to update Houdini. 1st time a while ago I got a "corrupt install" error when trying to run the Launcher after install. SO I gave up.

This time it seems the Launcher was installed, but I get a "Error while extracting from houdini_19.tar.xz: Can't unlink already-existing object" error when trying to update from 19.0.561 to the latest 19.0.589.

Getting the same.. "Waiting for 0 other actions" .. after waiting for about 5 minutes it finally uninstalled the version I wanted to remove and is working normally, but it would be nice if the user was informed to wait instead of having to guess as to how long something like this would take.
See full post

traileverse
So to confirm, that's the reason why I'm not seeing the result of the variant in this case?

I'll defer to someone with more usd knowledge than I on that one. Maybe Chris R is around? @goldleaf

yeah, I really want to get a more comprehensive understanding of how LOPS treats these composition arcs
See full post

Houdini Engine for Unity » When in session sync, I can't undo the edits in Houdini

Piling on here, having the same issue.
When using session sync I can't undo any new actions in Houdini, making it unusable really

Usually you can't expect 2.0 version of any node type to be the same as 1.0

So if you want exactly the same behavior switch to 1.0
See full post

Grendizer
So is there a "Mountain to Attribute noise" guide?


It's not possible to match one-to-one, unless you crack open the attribute noise and modify it heavily.
See full post

Hi how to change the font size of text in Houdini Console without affecting the rest of UI. the stuff that I printf in Vex are in tiny font and not readable.

Also can I text wrap in the Wrangle vex editor?

Technical Discussion » What does @P when run over Primitives mean?

I am always confused about this and it is difficult to find an answer on the vex docs page.
When I run over Primitives in Vex, what does @P here mean?
for example, if I use the following on three connected lines with four points
int closept = nearpoint(1, @P);

I tried to printf the P attribute and saw three vectors which seems to mean that @P has nothing to do with the points but probably belongs to each line. It's not vertex otherwise 6 values will get print out.