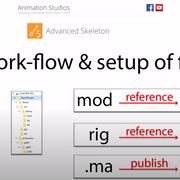 it was a huge reason why I stopped using it

mestela
capture packed geo is what you wanna use.

This works, it attaches Geo to the Joint, but its missing some features.

Made some progress on this, I just need to add the option of scaling based on the Link length.

So, this is working in my test….I need to put it into a Crowd and see how it performs there as well.

…hmm…I should probably get the secondary rigid animation working before that. Like, based on the frame delta of Link length value, calculate some other motion that can be applied to other parts of the rig. For example, a Piston that has exposed gears inside of it. Rotating those gears as the Piston expands/contracts, procedurally.
Edited by TwinSnakes007 - 2020年12月5日 03:13:28

“Why don't Side effects take a little of their budget to pay for the courses?” i can't agree more.
Report

Maybe SideFx is waiting until KineFX is out of „beta“.
As far as I know from their last presentation is that KineFX will become more user friendly.

I just want to add my 'plus one' to the requests for mechanical rigging and constraints tutorials, eg: mechanical robot arms, pistons etc.
Edited by Mike_A - 2022年10月4日 07:52:15
Report