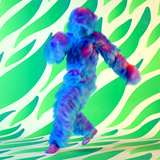 npetit
Instead of an attrib copy SOP, use an attrib reorient SOP, plug the static mesh in the second input, and set v as vector attrib.

This didn't quite work for me. It was somewhat there, but some of the vectors were not exactly copying correctly from the original source.

A very helpful user named islamoos over on ODforce helped me find a working solution.

.hip file attached if anyone else is after a similar thing.

Crosspost from Odforce, as this one is proving difficult!

I have two objects. A static object I'm creating velocity vectors on, and a duplicate / animated version of the first object.

I'm trying to copy velocity vectors from the static object onto the duplicate animated object, but the point rotations are not accounted for. The copied velocity vectors keep pointing in the original directions.

Hi thanks for this npetit

If I try your first example of packing the volume before animation, then on the sop import set the packed primitives to create xforms, the volume does not render at all.

However your second example of adding the point velocity surface attribute to the volume does work.

I'll translate some of what I've learnt here into my problematic scene file. It's a little more complex than what we have in this simplified example here, but this is helping me get my head around what might be required.