What are commercial licenses

An entitlement is a "voucher" for a license(s) that you are entitled to install on any of your machines.

There are different types of license entitlements:

Entitlements are transformed into licenses when you log into the licensing system and "redeem" or claim them.

When you redeem or install an entitlement, you bind it to a specific license server machine and you turn it into a license tied to that computer. It is at this point that the keystrings are generated and installed to your local machine.

The license management system is based on a client/server model with a license server running on one server and the applications running on one or more clients. Generally the server and client are different machines on a network.

The license server software and client application may be installed together on a single machine – this is how it is used for workstation licenses.

Licensing diagram for a local client and a remote license server:

Licensing diagram for a server and client on the same machine: 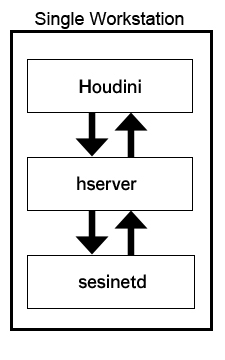 When does my (term based) license expire?

Can I use 2 computers for my workstation license?

Our licenses are set to expire before the expiry date on the invoice. Why?

If the archive is too big to attach to email, contact support@sidefx.com to have access to the secure SFTP server.

Apprentice licenses in a commercial facility

Floating Apprentice licenses may be requested which should be installed to a different license server machine than the one serving Commercial licenses.

You may install Apprentice learning licenses on the individual machines themselves and tell users that they will have to switch to the local machine as the license server, using the License Administrator. However, care must be taken. If you open a Commercial file with Apprentice licenses, those files will be downgraded and will not be able to be re-open with Commercial format.

The same installation package is downloaded by all users, whether Apprentice, Indie, Commercial, or Education. The installed licenses determine which features are available in the application and what restrictions are imposed on its use.

If you want to download a specific build or version, please refer to Houdini builds.

Run the Houdini setup program by double-clicking the downloaded executable.

You do not need to Run as Administrator. As long as your user account has permissions to install programs, you should be fine. 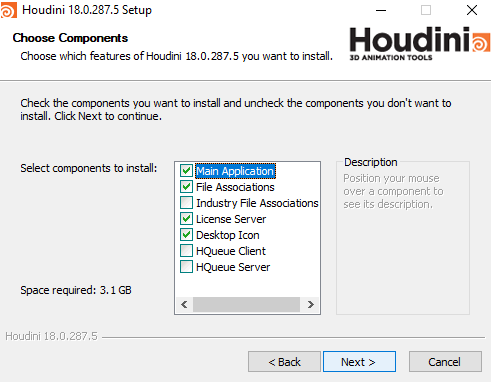 Once installed, the application is available by default through:

You will be prompted to install Apprentice licenses when you launch the software.

The following two services (found in Services.msc) will need to be in the runniang state for Houdini to function: 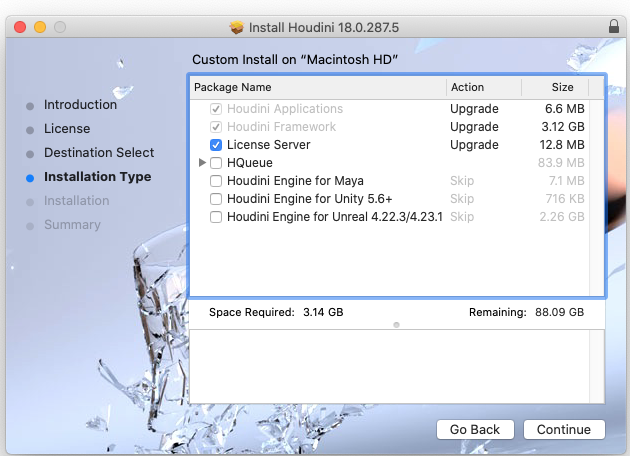 Once installed, the application is available by default through:

You will be prompted to install Indie licenses when you launch the software.

The installer must be run using sudo.

Note:
Make sure that the install file is not located in root's home folder (/root) as this will give you permission errors during the install process.

You can also double click on the houdini.install file with your mouse. It will run the installer in a terminal. 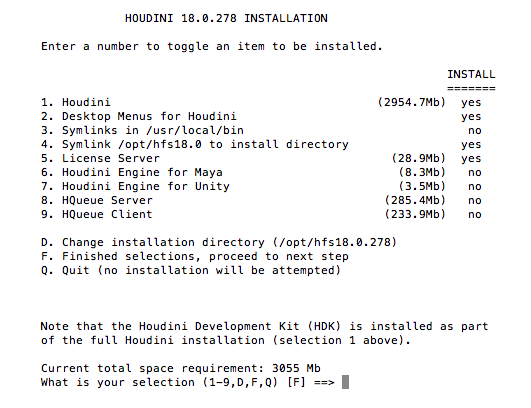 An example of installing Houdini from the Terminal:

To launch Houdini from the Terminal, type the following:

This should setup the Houdini environment for you.

For silent installs run the installer with /? for documentation:

It is recommended to use the defaults unless you have specific needs, such as installing Houdini on a shared network path. You cannot cannot define the "License Server Path" with the /Registry option.

To set the License Server

Once your account has been setup, the system will send an activation email. This will be for your licensing account so you may install licenses using the License Administrator (hkey). Your email address will also receive other notifications from the system such as new license entitlements to be installed, upgrades or extensions to existing licenses. Please ensure that you have licensemanager@sidefx.com whitelisted in your spam settings.

You will have two ways to configure licensing for your facility:

About your Houdini License Server:

Setup the server and clients:

Use the License Administrator (hkey) on the client machine to look to the central license server.

By starting Houdini for the first time or without a license, you will be prompted to install either:

Choose the second option: I have a paid license for Houdini and click Next.

Any extra Render or Engine licenses may be installed onto render nodes.

Please check the system requirements to ensure your operating system is supported for Houdini licensing.

The license server software will serve keystrings up to one full version higher.
For example, if you are running a license server at version 16.5, you may serve only up to 17.5 keystrings. You will not be able to serve 18.0.

If you are running a central license server, we do recommend alerting your users that an upgrade will take place. It will be important for them to save their files during this time as a precaution. In general, an upgrade of the license server software will not impact users. The heartbeat is set for approximately 20 minutes. This means that if a client machine is not able to make contact with the central license server in that time, the active Houdini session will close.

This process will generate the keystrings and install your upgrades. The keystrings will be written to the licenses file on the machine automatically.

Please make sure all licenses installed on the machine have been upgraded, including Mantra.

To install the new expiry date:

This process will generate the keystrings and install your new expiry dates. The keystrings will be written to the licenses file on the machine automatically.

Returning licenses will release them from the computer name and hardware. They will be placed back into your SideFX licensing account as uninstalled entitlements which can be pulled down from another computer using the License Administrator.

When you return a license, a disable code is calculated and written to your licenses file on the computer.
The disable code is also recorded and added to your account. The License ID is then invalidated.

There are 2 ways to return a license:

Once you have the Houdini environment setup in your Terminal, use sesictrl to return the license: 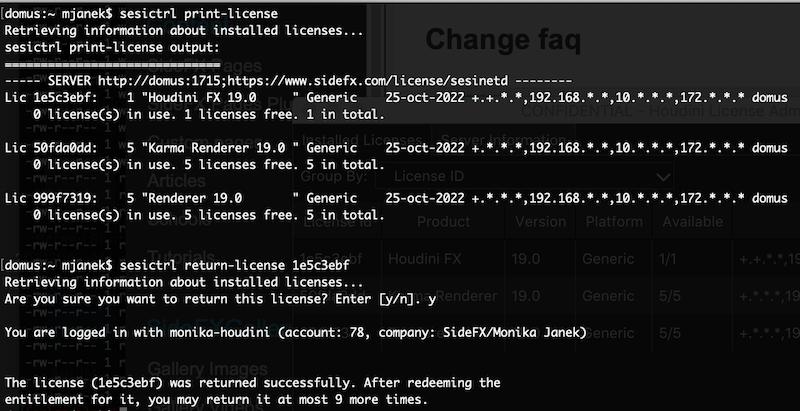 Houdini Engine is a non-graphical version of Houdini. 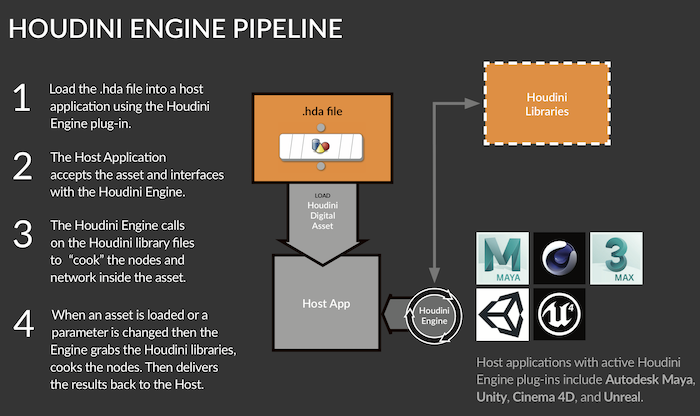 To set up more render nodes and access your unlimited supply of Mantra tokens, please contact sales@sidefx.com or support@sidefx.com.

IFD generation, (similar to generating renderman rib files), and "writing" the pixels themselves.

When you hit the render button in Houdini, the IFD generation can be done either in the background, (where the .ifd is simply written to memory and not to disk), or you can choose to write the .ifd to disk. This part of the process takes either a Houdini-FX, Houdini-Core or a Houdini-Engine license.

Generally, our users will have a queueing software, (such as our Hqueue), that will distribute the IFD generation depending on how many Houdini-FX, Houdini-Core and Houdini-Engine licenses you have. Once the IFD generation is done, the queueing software will then distribute the renders to the render machines, depending on how many mantra licenses are available, (please remember mantra licenses are free).

If you do not hold an Engine license. You can render the IFDs to disk with the interactive session of Houdini, and then distribute the IFDs to be renderer by the mantra tokens.

Having Houdini Engine licenses helps you speed up your renders, as the IFD writing part is the most time consuming. At the same time, having an Engine license allows your artists to keep working on their Houdini files.

It is a general-purpose job management system that distributes, monitors and manages tasks across a collection of computing nodes, or client machines. It specializes in managing render and dynamic simulation jobs submitted from Houdini. However, it be customized to work with any job from any application.

The easiest method would be to use a hypervisor to create a clone of your physical or virtual license server machine. In the event of failure of the primary machine, you will be able to spin up the cloned image and continue to serve network clients.

It is very important that the clone has the same machine name and MAC address (network device hardware address) as the primary machine. This will allow you to serve network clients using your existing keystrings.

With your hypervisor, you should be able to edit the clone machine details to manually enter the MAC address.

To create a clone:

Cloning machines will still require some manual intervention. If the primary machines is unavailable, you will still need to manually bring up the secondary.

If you need a more automated setup you may want to investigate VMWare's Fault Tolerance (FT).

Unfortunately we do not support a redundant server setup.

Please refer to the general License Management FAQ for things such as:

Neither Houdini-Indie nor Houdini-Apprentice licenses have access to beta releases of Houdini. Licensing for these become available on the day of official point release.

Only full commercial Houdini licenses (FX and Core) that have their AUPs (Annual Upgrade Plan) active, are issued early access to the beta Houdini software.

Houdini is backwards compatible. Older versions of Houdini will run with the most recent license.

There is a blind upload directory for you to submit your files.

In your FTP client or terminal shell:

SideFX provaides new builds of Houdini almost every day. These daily builds contain bug fixes and small improvements to the software. The detailed list of fixes is available in the journal under the Support menu. By installing a daily build, users are often able to benefit right away from our agile development process.

SideFX periodically designates a daily build of Houdini as a "production build". Production builds are released almost monthly and have gone through the full quality assurance process, so they are at least as stable as the original. It is thus advisable to upgrade from time to time, particularly from one production build to another to take full advantage of new improvements.

These are the most common issues with downloading, installing, or licensing:

Stuck in the licensing loop

You may see various pop-ups with warnings.
Sometimes resetting your Houdini preferences will help resolve issues.

The most common pop-up errorsare the following:

Icon with name 'BUTTONS_list_add' does not exist.

To generate a diagnostic printout for debugging licensing issues:

If you are experiencing crashes or other errors using Houdini, please send your machine information along with the license diagnostic and any generated crash logs to support@sidefx.com. 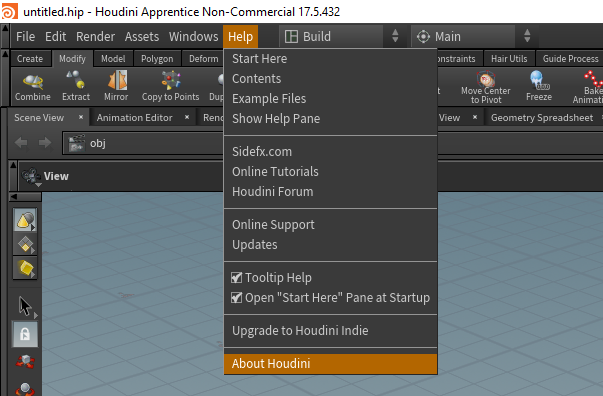 Windows
The crash error pop-up should tell you where the crash log has been written to. Most often it will be in your home directory under AppData. Ensure you select "Hidden Items" under the View menu in your file browser.

On OSX crash logs are saved in /tmp. You can only see this directory through a Terminal (Utilities->Terminal), not through the interface.

On Linux, the crash logs are saved in /tmp/houdini_temp